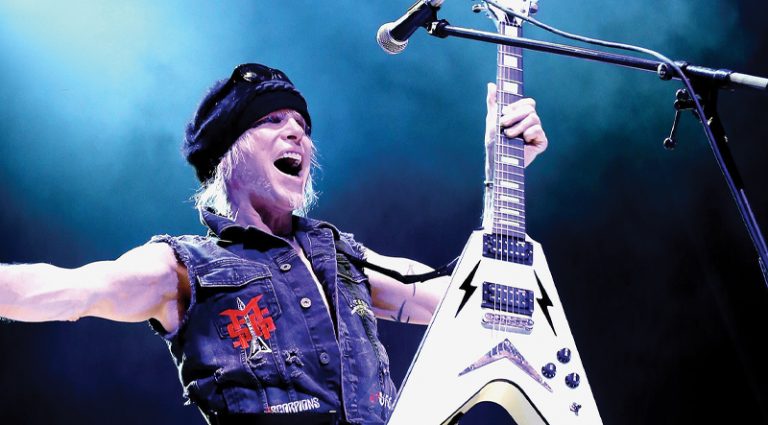 Michael Schenker has been part of many live releases over the years, and one of the most intriguing is his latest, Michael Schenker Fest Tokyo, which sees the man known for wielding two-tone Flying Vs reunited with singers Gary Barden, Graham Bonnet, and Robin McAuley, along with ’80s cohorts Steve Mann on keys, Chris Glen on bass, and Ted McKenna on drums. We spoke with him to learn more about the reunion.

What was the impetus for the new release?

In 2015, Michael Schnenker Group had an offer to play in Japan, and the promoter thought of Graham Bonnet’s band opening, then having him sing a couple songs. I went, “Wait a minute… I’ve been performing my most popular music from the past, but not with the original singers. It would be a great idea if I could have all three from the ’80s on one stage.” So, we asked Robin, Gary, and Graham, and they were excited about it. Then I was thinking about putting a band together, and came up with a line-up with Steve, Chris, and Ted – the original rhythm section of Assault Attack with Graham Bonnet.

It was a unique combination, and our first concert was headlining at Sweden Rock, then we went around the world, just from word of mouth via YouTube. After that, we started getting phone calls, including one from Japan to headline Loud Park on closing night. I asked, “Who is doing the first night?” They told me it was the Scorpions, and I said, “Sorry. I can’t. They’re too tricky – always cheeky and weird. I’m going to stay as far away from my brother [Scorpions’ guitarist Rudolf Schenker] as possible.” But immediately, my other promoter in Japan found out about it and made an offer to go to Osaka, Tokyo, and Sapporo. Tokyo immediately sold out. It was an unbelievable venue [Tokyo International Forum] – clean, big, fantastic sound, and great stage. I thought, “I have to capture this on DVD. I cannot just let that go.”

You play an interesting hollowbody Dean V in the DVD.

That’s one of my favorite guitars. It’s really nice and I actually ordered it with a specific idea in mind. I got it around the time of the second Temple of Rock album, Spirit on a Mission, but it didn’t make it in time, so I wasn’t able to use it. But I love that guitar, and decided I’d use it in Graham’s parts [live]. So, it changes things around and marks his part, and Robin gets the black-and-red V, and the black-and-white is for Gary. They’re all great guitars.

I used to have a chrome one and the Michael Schenker Kaleidoscope, which were fantastic, too, but they were stolen. All the guitars that I get from Dean are fantastic. In 2008, I did a promotion tour with Bose speakers, where I played to a backing tape. At each of the 10 appearances, we had a giveaway guitar from Dean, and fresh out of the box, they played fantastically, without any problems. It’s a good thing when you can get a guitar out of a case, with all the plastic on it, pick it up, and it plays. That’s the way they are. I’m so sad about [Dean owner] Elliott Rubinson passing away. He was such a great guy. It’s just… annoying that all these people are dying. And it doesn’t get slower – just goes one after the other.

One of your trademarks is that you don’t use your pinky on your fretting hand.

That happened naturally. People go to school and learn playing guitar – all the technical aspects. But they don’t necessarily do the other part, the feeling part and the stuff that comes from the heart. So, you can learn in school how to play correctly and set your fingers correctly in such a way that makes it possible to play faster. But those things are not important in the world of “handmade rock,” I call it. Handmade rock is basically where you actually play and discover – it’s not practicing scales and using all the fingers, it’s about, “How do you get to the next tone? Where should it come from? What should it sound like? What kind of emotions do you want to put in there? Do you want to make the next tone sing, sustain, break up, hit it more than once with the vibrato?” All these different combinations – you make those choices in the moment when you improvise. So, by not having any rules in my head, I don’t really repeat myself. It’s just what you hear is “the Michael Schenker style.”