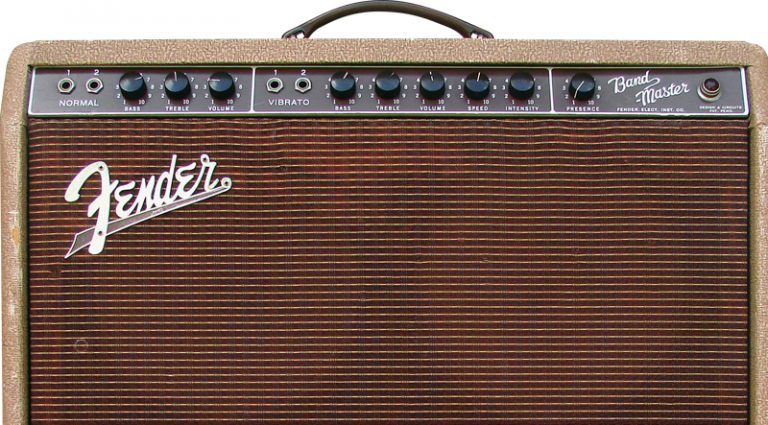 The earliest renditions of our gear icons are often the most valuable, but on many occasions it’s the transition models – those that bridged one era to the next – that elicit the most excitement from real enthusiasts. Such is the case with the 1960 “center-volume” Fender Bandmaster, model 5G7.

The tweed 5E7 Bandmaster that preceded it – the first of Fender’s quirkily appealing 3×10″ combos (profiled here in October ’16) – is a rare and exotic beast in its own right, but the short-lived 3×10″ in Tolex with newfangled front-mounted control panel is utter hen’s teeth. Add to that the illusive feature set of this early example and you’ve got an amp that really sets Fender fans’ pulses racing.

The amp’s owner – musician and VG reader Tommie James, sums it up. 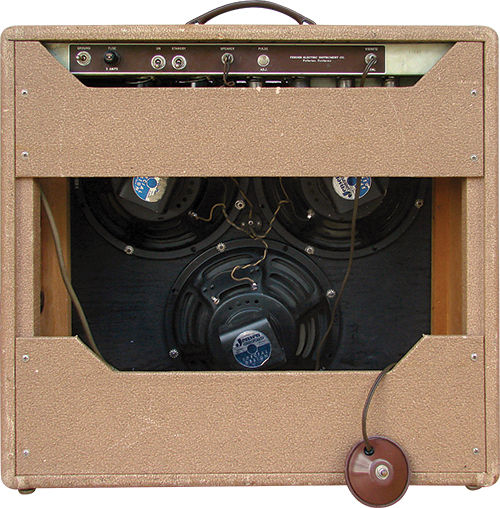 “This amp has the unique and rare features of the very first brown Fender amps, such as the rough pink-brown Tolex, tweed-era grillecloth, light-brown faceplate with matching color in the flat logo tail, center-mounted Volume controls, RCA speaker plug, and mysterious Pulse-Adjust [on the back panel] with a plugged hole.”

The closer you look, though, the more the quirks reveal themselves. Clearly, Fender’s transition from tweed-covered amps with rear-mounted chassis to Tolex-covered amps with top-mounted chassis – which was also a significant transition in the history of amp design et al – didn’t take us from the former to the more commonly perceived rendition of the latter overnight, and this Bandmaster, along with several of its early Professional Series siblings, displays a fascinating Frankensteinian cobble between tweed and Tolex.

For another perspective on this model’s history, we turned to Paul Linden, an authority on early Fender Tolex amps in general and center-Volume amps, in particular.

“These amps have an interesting chronology that applies, more or less, to all six Professional Series amps that went through the center-Volume transition roughly from late 1959 to about May of 1960,” Linden said. “The earliest phase had no metal corners and no tube chart, which makes them hard to date. Those from January and February of 1960 had charts, but often, no corners. March and April saw the last phase with protective corners and tube charts. My 5G7 Bandmaster has both April and May stamps on it, and a serial number in the high 500s, which is about the end of the run for the center-volume ones. The 3×10″ Tolex amps continued until the late fall of 1960 – November at least – but without the tweed style grillecloth after about September.”

James’ amp has no metal corners, and that’s the way it was made, but it does have a tube chart bearing the date-code stamp “JC”; J denotes 1960, C denotes March. Clearly, this was one of the last protector-less Bandmasters to go out the door before Fender figured out the cabinets were too ding-able without them. It’s probably a build from very early in that month.

The speakers in early Tolex combos represent another fragile design element that was eventually rectified by Fender. Accurate specs are difficult to come by, but most accounts rate these speakers’ power-handling at around 12 to 15 watts each, making even a trio of them ill-suited to handling the amp’s 45-watt rating – certainly not able to take it for long when the combo was pumping hard. (And you want to hear crazy? The equally powerful 1960 2×10″ Super got the same P10R speakers.) As often happened, this Bandmaster’s original set apparently gave up the ghost early.

“Note the ink stamp from 1963 on the inside of the cabinet, with a Fender four-digit return authorization (RA) number,” said James. “The first two letters are the week, the second two are the year. The same number appears on each speaker frame, indicating the original speakers were replaced with the P10Rs still in the amp.”

Interestingly, by the end of the transitional period, Fender was generally loading its more-powerful amps with robust Jensen P10Q speakers, likely in an effort to fend off such warranty claims. Nonetheless, the P10Rs in this Bandmaster somehow survived.

Other than the look and the control configuration, what’s the difference between the ’59 tweed Bandmaster and the ’60 Tolex model? It might be easier to say what’s not different. The preamp circuit in the 5G7 was entirely different from the 5E7. The gambit now opened with a 7025-derived gain stage (rather than the 5E7’s 12AY7) followed by potentiometers for Treble and Bass, then the Volume pot, and a second gain stage prior to the long-tailed-pair phase inverter. Thus, the whole center-Volume thing was begun by Fender because that’s where the control’s function occurred in the signal chain; that’s also where the Volume pot existed in the later brownface and blackface amps, circuit-wise, even though Fender had moved its panel position back to the more-traditional first inline and running the wiring back to and from, as necessary. This was different from the shared cathode-follower tone stack and split-load inverter of the tweed Bandmaster… and we haven’t even gotten to the Tolex amp’s legendary harmonic vibrato.

Linden, an accomplished harp player, tells us the amp is hard to beat for that, in part because of the large amount of bass generated by the circuit (thanks to higher available voltage).

“They may have the highest voltage of any Fender series; the 67233 power transformer kicked out 500 to 515 volts DC, compared to tweed models, which were about 100 volts less,” he said. “The large bass response also makes these cleaner than the tweeds, so notes hold together better and it won’t fart out as fast. It’s tone generally is cleaner than tweed but dirtier than the rest of the Tolex amps. It’s a magic spot for me.”

James relates that he acquired this startlingly clean example in a trade many years ago, and that it was original other than a replacement output transformer he has since replaced with a reproduction from amp maker Mike Clark, who also serviced the amp to keep it in action.

Interestingly, it appears most original 5G7 Bandmasters were equipped with the same 4-ohm output transformers used in 2×10″ Supers, resulting in a slight load mismatch in the 3×10″ (which present a speaker-load impedance of approximately 2.7 ohms), though Fender’s OTs always were fairly resilient in the face of such conditions. Regardless of the replacement part, this brown-Tolex Bandmaster is a raving beauty inside and out, and a fascinating time capsule that has eschewed the glass case to keep on making great music.