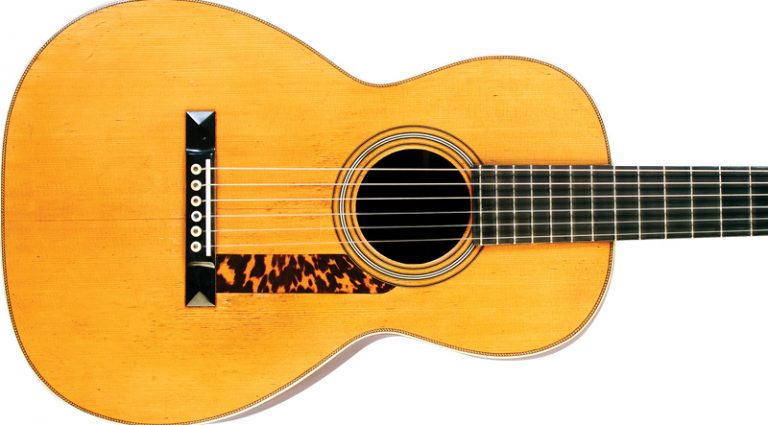 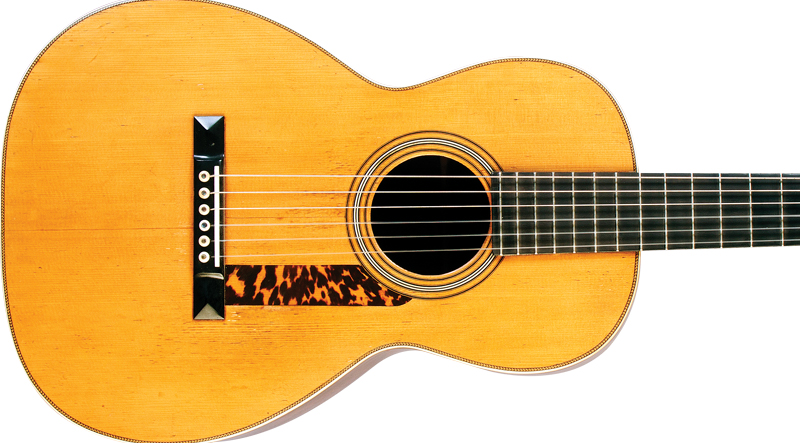 Exactly when did C.F. Martin begin formally using the two-part system indicating size and level of ornamentation on his instruments? Nobody knows for certain.

Martin was thinking along these lines by 1848, when he received an order for “1 large Degoni (sic), ivory edges and double side screws, ff (very fine) case $26.00” – clearly the description for a style 1-26 – and the system was definitely in place by October 26, 1856, when C.A.  Zoebisch placed an order referencing such designations.

Martin’s original sizes spanned from 1 (the largest) to 5 (smallest, a terz guitar) and included fractions. As time passed, requests came for larger bodies, necessitating the addition of nomenclature. Beginning in 1854, he applied 0 and as demand increased for a still-larger bodies, 00 (1858), then 000 (1901). Martin researcher/scholar Greig Hutton cites C.F. Martin, Sr.’s preferred size – the 0 body over the larger 00 – for its “more balanced” sound. This statement is best evaluated by the knowledge Martin used only gut strings, which work best on smaller bodies.

The first style 28 guitar was a 2½-28 shipped February 16, 1854. A special order, it appears to have originated as a slightly fancier style 26 (several 2½-26 guitars were made in this period). Early style 28 guitars are rare indeed, with only four 2-28, two 2½-28, and one 1-28 produced between 1854 and 1860. Early style 28s may be hard to differentiate from the style 26 because the “ornament” (purfling) is specified as “fine” for both and, in fact, specs for style 26 and 28 are practically identical in ledgers. Both had pearl sound-hole decorations, but the 28 was given German-silver machines instead of the brass used on the 26. Surprisingly, early style 28 guitars may not have herringbone purfling or cedar necks, as the two 2½-28s were specified with ebonized necks.

The 0-28 shown here was built in 1887 with ivory friction pegs – surprisingly, the choice of professionals in the 19th century. Geared machine heads were available going back to the early 1800s, but generally disliked for their tendency to rattle and the time required to change a string on a guitar so equipped. Conversely, friction pegs allowed a player to quickly bring a replacement string to pitch. It’s also worth noting Martin’s solid peghead was obviously copied from Spanish guitars brought to the U.S. in the 19th century and seen by C.F. Martin, Sr. and John Coupa. The latter influenced Martin very much from 1837 onward.

Interestingly, Martin’s V-shaped volute was also directly copied from Spanish makers such as Reyes, of Cadiz, but the Spanish peghead graft was quite different; Martin used a German-style dovetail that worked well for incorporating the shape of the volute, whereas Spaniards did not incorporate it with the dovetail joint. Martin also used a dovetail neck joint to fasten the neck to the body – very different from the Spanish heel joint, in which the neck and neck block are the same piece of wood slotted for the sides to fit. The Spanish system is sturdy, but it does not permit the neck to be re-set, which can be a significant problem on older guitars.

This guitar has a narrow (real) tortoiseshell inlaid guard that appears to be original. This is a very early example and does not appear to be a pickguard, but is likely intended to minimize fingernail damage from a player’s hands resting on the top. At the time, virtually all Martin guitars were designed for gut strings, and most people played classical rather than anything similar to country or blues as we know it. It wasn’t until the introduction of Hawaiian guitars that Martin made a significant number braced for steel, even though they produced steel-string mandolins beginning in 1894. Celluloid was available as early as the 1870s, but Martin did not begin purchasing it for “guard plates” (Martin’s designation for pickguards) until 1894 on mandolins and 1895 on guitars.

Martin did not begin to use celluloid-imitation ivory/ivoroid on guitars until 1918. The white bindings, nut, saddle, friction-peg tuners, and bridge pins are all genuine African-elephant ivory on Martins prior to 1918, and the company continued to use ivory nuts and saddles well into the 1960s.