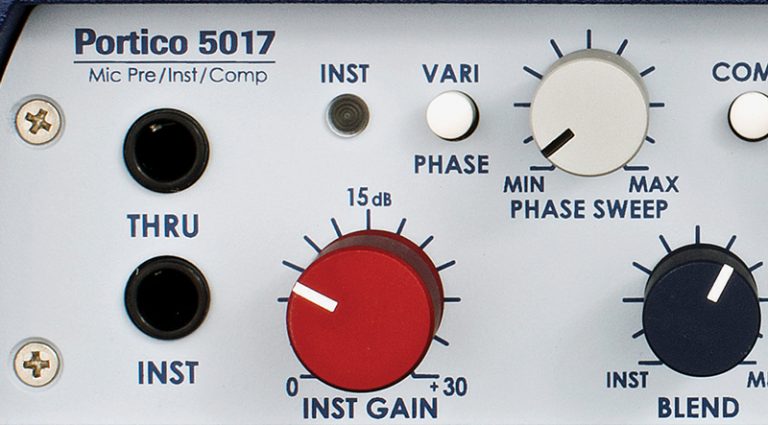 Despite what some folks may tell you about the merits of “going direct” for guitar, nothing sounds better than a good microphone and preamp.

The Rupert Neve Designs Portico 5017 is a small preamp that helps deliver the famed Neve sound heard on a million studio albums; better still, it’s highly portable. The rugged unit is made for guitarists, bassists, and singers who want to upgrade their studio or live tone without much fuss.

The utilitarian preamp sports two channels, one for a mic and the other for an instrument. An acoustic guitarist playing a coffeehouse gig would plug a vocal mic into the back of the 5017 and a direct-out from their acoustic/electric into the front. There are Gain controls for both channels, plus a one-knob compressor that can be applied to either the mic signal only or the blended mic and DI.

Another excellent option is to run the unit with both a mic and direct guitar/bass input, and use the Blend control to find the sweet spot between. The Vari-Phase button and Phase-Sweep knob shape tone and fix any phase alignment issues. The Silk button adds some classic Neve magic to the signal, a very musical kind of distortion and boost that sound engineers crave. If these features weren’t enough, a High Pass filter button knocks out boomy bass frequencies.

Plugged in, the Portico 5017 was a Swiss army knife of audio solutions, making both acoustic and electric guitars sound better. The Compressor and Silk controls were icing on the cake; the Blend feature is perfect for guitarists who know the magic of microphones. A back-mounted button for 48-volt phantom power (for use with condenser mics) is more evidence of the 5017’s handiness.

Speaking of which, the sE Electronics Voodoo VR1 is a wonderful mic to pair with the 5017. While ribbon mics have a reputation for smoothing out the harsh upper frequencies of bright-sounding sources (like a typical guitar amplifier or 12-string acoustic), the VR1 maintains more upper-range detail than traditional ribbon mics, but still delivers a warm, delicious tone. The advantages of the Voodoo are that it’s passive, so it doesn’t require phantom power, and it’s affordable, unlike many ribbon mics that are on the pricey side.