Ready to step onstage but your amp won’t sing? Traveling, but don’t want to lug a lot of gear? Need a backup for a gig or session? Got a tiny apartment and no room for an amp stack? Call in the little amp that could.

Vox’s new line of MV50 amp heads might be termed “micro stacks.” They’re about the size of a stompbox. And they tip the scale at just 1.19 pounds. No, that’s not a typo.

These mini terrors make a Marshall stack look like it needs a workout regimen and diet of carrot sticks and celery. And the little guy makes a big sound.

The MV50 is powered by an analog preamp circuit. At it’s heart is a NuTube 6P1, a new “vacuum tube” that uses a vacuum fluorescent display with an anode grid filament. To the non-techie, the NuTube could be mistaken for a computer chip; it’s about 30 percent of the size of a 12AX7. Vox sees it as the way of the future.

The miniaturized NuTube saves on power, size, weight, and cost while being long-lived – and cranking out authentic tube tone.

The MV50 is available in three flavors. Clean is designed to mimic “classic American amplifiers” – you know, those dressed in tan tweed. The Rock is all about aggressive, high-gain British tones – think of that obese stack mentioned earlier. And the AC is voiced to serve that distinctive chime and classic crunch of an AC30 – without the need for an auxiliary fan to keep it cool or a dolly to wheel it about.

The amps include headphone and speaker/line out options, so you can run direct to a mixer, PA, or computer. Vox offers its BC108 cabinet to pair the heads with an 8″ speaker. And yes, you can stack two – or more – of the cabs atop each other. 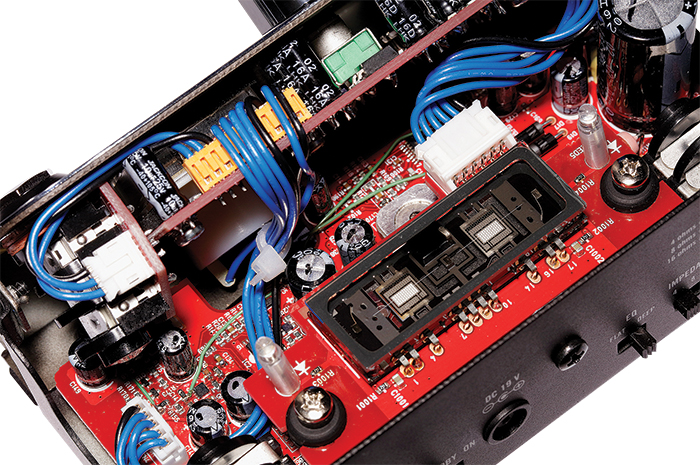 An EQ option with a sliding switch allows the user to choose between Flat and Deep. When using a small cab such as the BC108, Deep emphasizes low frequencies and trims higher frequencies. The Flat mode is all-out, without emphasizing or reducing any frequency ranges.

We tested the MV50 AC plugged into a vintage Fender tweed 1×10 extension cab and various guitars. Cranking it up, the MV50 immediately proved that size isn’t everything. This little fellow rocks. It offers solid tone and the power to express it.

Playing blues, rockabilly, rock, and more, it sounds eager to please. Dial up more gain and it progressively goes from bark to bite with nice compression. The tone is thick and tasty with an aggressive, in-your-face edge.

While the MV50 AC’s voice is strong, it’s also a bit flat without the overtones, richness, or headroom of an AC30. But that’s not for want of trying. Any amp has pros and cons, and here, the huge pluses of the small size and inexpensive price win out over any compromise.

No, this is not going to replace your ’64 AC30 Top Boost. But you’re going to want an MV50 AC to use with a full stack, tucked on your pedalboard, or to carry in a guitar case along with an extra set of strings.