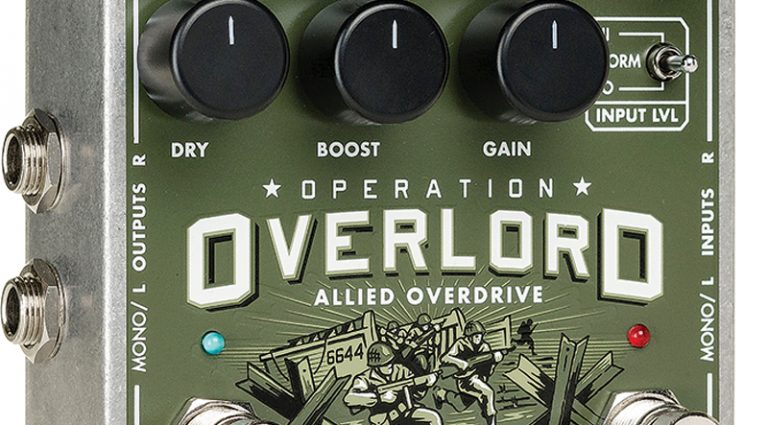 Like its namesake World War II invasion, Electro-Harmonix’s Operation Overlord Allied Overdrive involves an assault of sorts – though this particular Operation Overlord’s attack is solely one of grease, gain, and grit.

Originally developed to allow keyboardists to mimic the kind of tube overdrive guitarists have enjoyed since the birth of rock and roll, Operation Overlord also excels when plugged into a guitar rig. Equipped with Volume, Treble, Mid, and Bass knobs to sculpt EQ settings, this solid little pedal also has a Dry knob that dials in the amount of the affected signal, a Boost knob to control the extra gain fed into the main circuit, and a Gain knob for overdrive and distortion levels. An Input LVL switch that lets you control the input level of your instrument offers Hi, Normal, and Lo settings. Finally, the pedal, which sports an olive drab (natch) graphic of American soldiers busting through hedgehog obstacles on D-Day, also comes with Bypass and Boost switches. Input and output jacks (two each) allow for mono or stereo, and the pedal runs on an accompanying 9-volt adapter with a center negative plug.

The Operation Overlord uses JFET gain stages for low to medium gain but walks the line between overdrive and distortion with an amp-like disposition. The Boost switch adds a classic-style overdrive circuit before the JFET stages, which sounds like an added feature on your amp. You can also flip a switch inside the pedal so the JFET and the boost work independently. The Input LVL is great for adjusting your level for keyboards, single-coils, hotter pickups, or gain stacking. It’s also useful for those who simply want to slam the front end of their amplifier.

Operation Overlord’s overall quality is one of warmth and musicality. Everything from edgy cleans, midrange boosting, and chunk-infested hard rock can be conjured through small combos and 50-watt heads alike. Strats fatten up and Les Pauls croon long-term sustain with just a few adjustments. Using the Boost function in conjunction with the Gain knob unleashes nifty overtones and harmonics. And the Overlord proves sensitive to dynamics and a guitar’s Volume control while retaining a seductive amp-like character that never sounds fake or metallic.

The Overlord Allied Overdrive pedal shines particularly well if you hanker for rich tones with warmth and boldness, but it could make a fine addition to any armory of sonic weaponry.