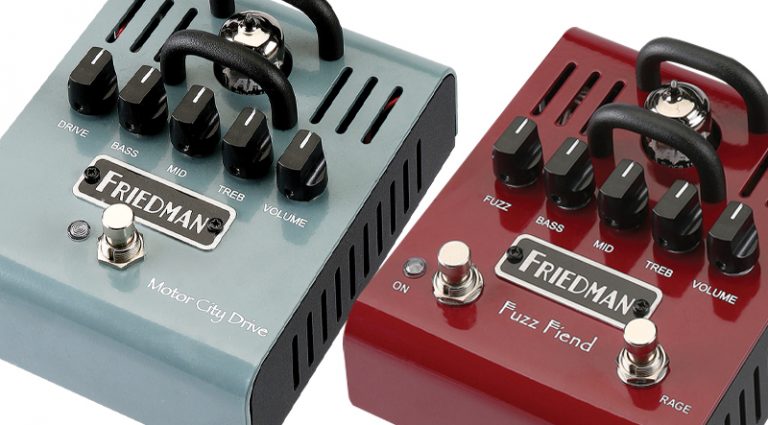 An innovative designer, builder, and repairman, Dave Friedman has worked with some of the biggest names in the music industry, lending his artistry, experience, and great gear and amp mods to musicians of all levels of notoriety. Just as impressive as his amplifiers, guitars, and accessories are Friedman’s line of effects pedals.

Friedman’s Motor City Drive, for example, is a sonic love letter to his hometown of Detroit. Tough-looking, with a 12AX7 tube brought to life by 220 volts and an accompanying 12-volt power supply adapter, its five knobs – Drive, Bass, Mid, Level, and Volume – are keys to sonic glory. Plus, the tone controls are passive, allowing you to plug into a clean or dirty amp for big, fat overdriven vintage amp sounds.

Straight out of the gate, instead of the thin, girthless, and toy-like reediness found in other drives, this bad mamma-jamma greets you with a big, breathy sound that moves the air. Played through a Deluxe Reverb and a 120-watt channel-switching half stack, it did everything from AC/DC to Mastodon, but was easily tempered for blues a la Gary Moore.

The EQ allows a tight bottom-end and smooth mids for myriad era-specific saturation. Dialing back the Gain with a Les Paul morphed the sound to fit right into Gov’t Mule or Black Crowes type of rhythm sections – gritty, complex, full, and organic. Leaning more toward the best lead tones of the ’70s and ’90s than the ’80s, the Motor City Drive is a smokin’ pedal with plump, chewy overdrive. 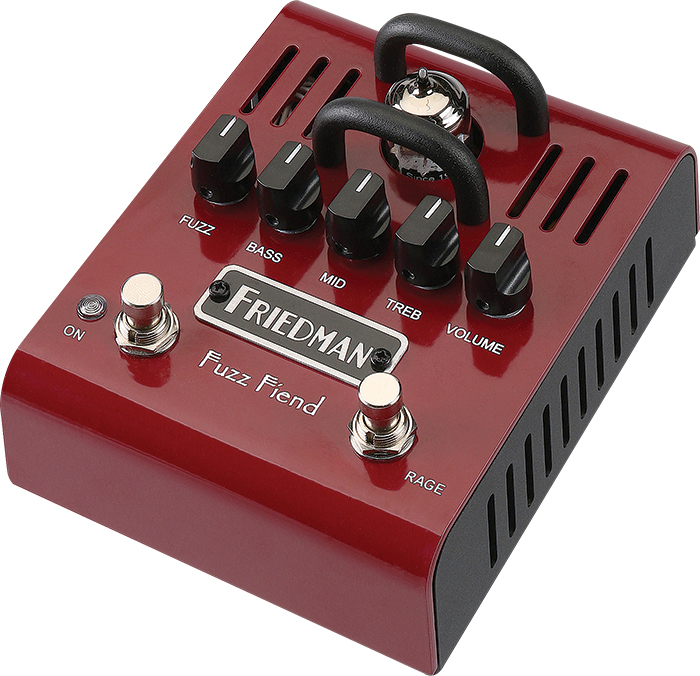 Sticking with the concept of a visible 12AX7, 220 volts, and 12-volt adapter, Friedman’s Fuzz Fiend has a three-band EQ – Bass, Mid, and Treble – along with Fuzz and Volume knobs plus a Rage switch that produces long sustain – and just maybe neighborhood riots. Adjusting the guitar’s volume when this button is pushed down transforms sustain into freakish oscillation. Adjust the Fuzz knob while the Rage switch depressed, and the oscillation changes pitch.

More reminiscent of modern overdrive-style fuzzes than classic ’60s and early-’70s ripped-speaker sounds, the Fuzz Fiend still puts you directly in the front pew at the Church of Fuzz. Quick adjustments allow you to approximate “Spanish Castle Magic” or your favorite unshaven grunge fuzz tones. More importantly, the Fuzz Fiend will positively color any amp regardless of humbuckers or single-coils to create individualized nasty recipes with upscale beauty and vivid harmonics.

The Motor City Drive and the Fuzz Fiend are excellent concepts in design. The addition of the 12AX7 and simple (but effective) three-band EQs will help even the most sophisticated tone aficionado get lost in a den of sonic rapture.