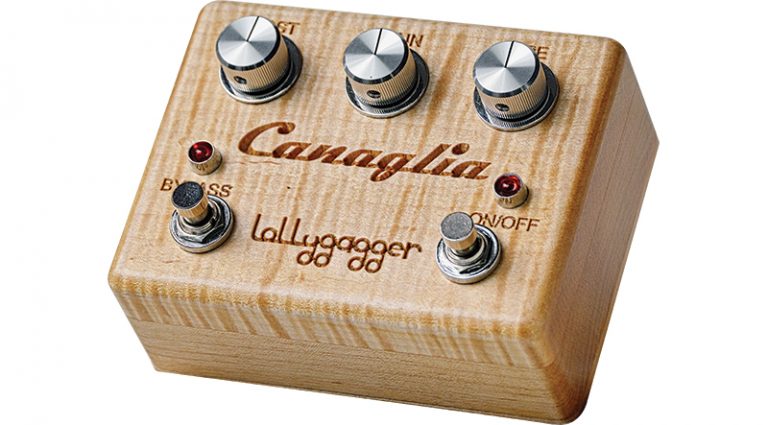 Sean Wright’s love for guitars and electronics has resulted in a family business that realizes his vision of stompbox perfection. Throw in the business savvy of wife Colette, and Lollygagger FX is turning heads with handmade pedals featuring rugged tones and unique aesthetics.

Lollygagger FX’s flagship model is the Canaglia Overdrive. Advertised as a gain-shaper rather than a tone-shaper, the Canaglia pushes an amplifier’s natural breakup to elicit a wider range of overdriven sounds.

The Canaglia’s most striking feature is its super-solid enclosure. Wright uses hardwoods and a variety of colors including Ocean Green, Vintage Red, Natural Amber Tint, Black Wash, Island Blue, and Purple Reign. He’ll even take requests. Each pedal is hand-wired and true-bypass.

A cranked Marshall combo and a Fender Pro Reverb were put to use with single-coil and humbucker guitars. Plugging the Canaglia into a 9-volt adapter (it also runs on 18 volts) and starting with the controls at 12 o’clock, morbidly obese garage rawk erupted. Nasty power chords became the order of the day as slick achievement-level pyrotechnics gave way to meat-and-potatoes simplicity showcasing the pedal’s clarity, power, and ballsy sustain.

The Post knob acts as the volume control; the Gain and Pre controls consort to dial in saturation and boost. The Pre knob controls the gain going into the Post knob circuit, while the Bypass switches the gain on and off, allowing the pedal to go from an affected rhythm setting to bodacious lead tones in a pinch. There’s also a Bypass switch and an On/Off button.

But the Canaglia isn’t all power and muscle. Dial it back for some crusty southern rock, gnarly Brit-rock, or hostile blues. It can add a bit of growly low-end to humbuckers, but single-coils benefit the most.

The Canaglia Overdrive’s polarizing personality will speak to the brash, rocking purist who likes a big hairy sound with teeth.