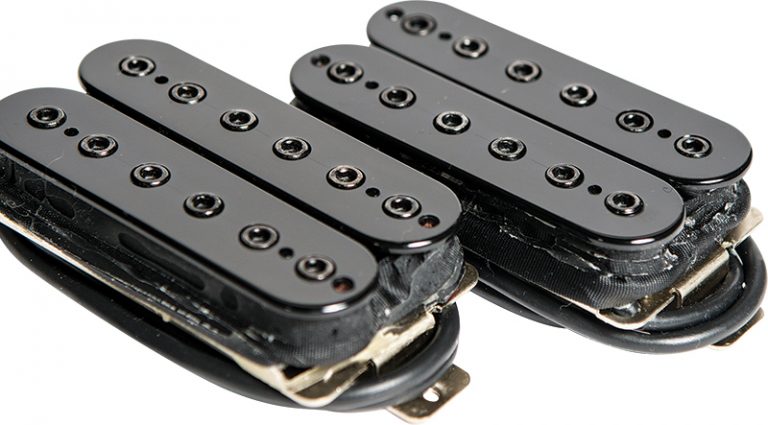 Michigan may have given us the automobile production line, but Troy-based Iconix Pickups is the antithesis of an assembly line operation, and now Iconix is building quality pickups for a genre befitting the region’s history of heavy industry: metal.

Iconix guru Don Smith builds his designs using the same scatter-wound technique as early pickup makers. The signature touch that each maker has in guiding the fine wire ultimately adds personality to a pickup, much as a luthier-built guitar bears the stamp of its maker. Smith even hand-cuts each pickup’s maple spacers and degausses and recharges his rough-cut, unpolished magnets.

The Iconix Black Mass set, demoed in a Les Paul Studio, comes with black surrounds, hex-head pole pieces, and a coverless glossy black finish. The neck pickup is made with an Alnico V magnet measuring approximately 11k; the bridge is an Alnico VIII at about 14k. These pickups are designed to drive an amp and speaker cab hard.

Through a Marshall JCM800 half-stack EQ’d flat and clean, the Black Masses sang with distinct clarity. Balance between the bridge and neck was excellent, and the combination rang strongly with little volume loss due to frequency cancellation. When the preamp was dialed up, with the mids dipped and the bass increased, the half-stack started trembling before the Master hit 5. Driving and spitting yet carefully delineated eighth-note chord riffs, a characteristic metal style, demanded controlled pick technique, as the Black Masses exposed every sloppy downstroke. Either pickup alone and in combination had the beefy sustain necessary for satisfying long tones and clean hammered-on or tapped solo lines.

Commanding the huge force of a Marshall is like driving a Detroit-made truck downhill with a full load of Michigan timber. Iconix Black Mass pickups could help give added control over that awesome power, but fingers and talent are ultimately responsible. Practice…