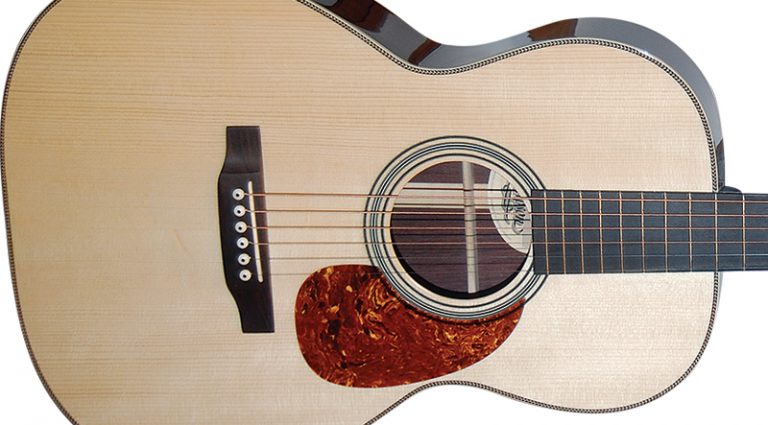 Until 1928 the largest and loudest guitar in C. F. Martin’s catalog was their 12-fret 000-sized guitar. Until the OM premiered in 1929, the 12-fret body was also the standard shape for all Martin flattops.

The late Charles Sawtelle, guitarist in the Colorado bluegrass band Hot Rize, was an avid vintage guitar collector. One of his go-to instruments was a ’29 Martin 000-45. Now Oregon-based luthier Preston Thompson, who considered Sawtelle a friend and mentor, has created an instrument based closely on Sawtelle’s Martin. If you long for that vintage 12-fret mid-sized Martin sound but can’t find a vintage example to your liking, Thompson’s re-creation – the 12-Fret 000 – might be the perfect solution.

Though the majority of Thompson’s output comprises custom orders, occasionally he makes a “standard” model. The 12 Fret 000 is one of those. Upon opening the case the most immediately noticeable feature was the guitar’s Adirondack spruce top, which had an almost bone-white color and a tight grain near the center that expanded into wider grain as it reached the outer edges and the herringbone trim. The Indian rosewood back and sides exhibited a rich color and nice straight grain similar to what one is accustomed to seeing on vintage Martins – and unlike the swirly and less stable rosewood common on some new instruments.

The review sample had a 25.4″ scale length, but is also available with a shorter scale length if desired. The mahogany neck had a single-action adjustable truss rod with the nut located inside the body. The neck profile was classically round with a very mild canoe shape.

The string setup on the review guitar was a bit high, but the instrument played easily even above the fifth fret. Intonation was spot-on – a Peterson strobe tuner confirmed just how on-pitch the 000 remained even during a note’s decay.

Many small-bodied guitars have small sound with limited bass response. That tendency certainly is not true of the Thompson 000. Not only does this guitar have bass – “like a cannon shot” in Charles Sawtelle’s words – but substantial volume, as well. In a guitar duet with a dreadnaught, the 000 had no trouble making itself heard.

The 000’s tone and harmonic balance were outstanding, especially for such a new instrument. Individual notes all over the neck were articulate, while chords, especially when pushed, had that characteristic vintage Martin rumble.

Even with resources like the Internet and all the big guitar shows that now abound, finding a vintage instrument in the right condition with the right feel and sound can sometimes be difficult. Preston Thompson’s new 12 Fret 000 gives guitarists who pine for a vintage 000 the option of owning a guitar with exactly the specifications they want. I suspect that the review sample won’t remain in the inventory at Telluride Music for long – it’s simply that good.