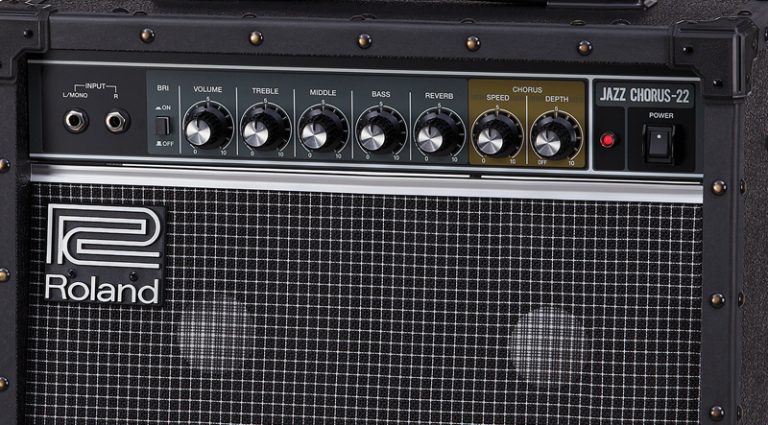 The original Roland Jazz Chorus doesn’t get the kind of love that American and British amps in the rock and blues world receive, but its place in history is well documented. Dig a little and you’ll hear this amp on some of music’s most iconic recordings. From Andy Summers of The Police to Al McKay of Earth Wind & Fire, from Albert King to Metallica, its ultraclean shimmer is the standard for lush guitar sounds. With its Dimensional Space Chorus, its immaculate tones can be heard on pristine rock arpeggiations, searing blues, and bopping jazz textures – which, come to think of it, covers a lot more sonic real estate than its more famous counterparts.

The JC-22 Jazz Chorus is Roland’s 30-watt version of their JC-40, dimed for home use. All the beautiful single-channel, solid-state tones and functionality remain, but in a smaller, easier to manage 26-pound package. High-quality stereo reverb accompanies retro chorus sounds along with stereo and mono inputs, allowing the player to plug into their favorite stompboxes or multi-effects units. Two independent power amps project three-dimensional aural colors through a pair of 6.5″ custom-designed speakers.

The front panel displays classic aesthetics along with a Bright switch, Volume, Treble, Bass, and Reverb knobs, as well as a Speed and Depth knob for the chorus. The rear offers headphone inputs and left and right line-outs for plugging into a recording console or mixing board. The effects loop works with either mono or stereo outboard devices and gives the option of either series or parallel operation. You can also connect footswitches at the rear for turning the chorus and reverb on and off during performance.

Wielding a Strat, and with the amp’s Bright switch disengaged, the Reverb and Chorus knobs turned to 0, you get a full, warm, substantive sound that works great for clean blues or jazz. It’s the kind of clean that could embrace elegant major 9th chords or bite into the blues if you know how to finesse your attack. How you dig into the strings makes all the difference in the world and the JC-22 puts the kibosh on the theory that solid-state amps lack grit and humanity. It’s all right here with plenty of power for your practice space or recording. It sounds better the louder it gets, allowing more opportunities to coax subtleties using your fingers, or using your guitar’s volume control to conjure nuances.

The Bright switch adds a smidgeon of top-end, and slowly dialing in the Reverb allows sounds ranging from subtle moistness to a full-blown surfin’ safari. Adjusted to its maximum setting, the Reverb produces a slight echo. Nice. While not exactly a blank canvas in terms of character, the JC-22 expresses what you put into it unlike many boutique amps with polarizing personalities. Its straightforward countenance makes it well suited to time-based effects and all varieties of dirt boxes. The truth shall set you free.

Last but not least – the reason you came to this party. The Speed and Depth knobs for the Dimensional Space Chorus give control over a wide range of super thick, Mike Stern-esque, chorused sounds with liquid beauty and substance. Crystalline chime and jazzy bottom end is all right there within your purview. Blending the Reverb and Chorus together provides even more pedal-free opportunities, making this a wonderful standalone plug-in-and-go wonder – or a pedal-friendly base tone for your practice space or home recording studio.