Lou Rosano, founder and namesake of Louis Amplifiers, was one of the first of what has since become dozens of “boutique” amp builders, having first produced a Fender tweed clone back in 1992.

Like most indie builders, Rosano spent his share of hours with his face stuck in books, studying the designs of Fender and Marshall. As a builder, it didn’t take long for Rosano to gain a reputation with some heavy hitters; the late Danny Gatton used one of Lou’s amps, and other greats have along the way, including Hubert Sumlin, Duke Robillard, Keith Richards, and John Fogerty. Rosano recently invited VG to test one of the new additions to his line – the KR M12 Keith Richards model, from his artist signature series.

mp tubes, a 5AR4 rectifier, and two EL34s in the output section to produce 40 watts, which is sent to a Celestion G12H-30. The KR’s very handsome cabinet is made of solid pine, meticulously covered in black tolex with gold-piping accents. The control panel is reminiscent of a plexi Marshall, but with old-school lettering that looks more like it came from the Fender amp shop. Controls are Volume, Master Volume, Treble, Bass, Middle and Presence. The control panel also hosts a ground switch, fuse holder, switches for On/Off and Standby, and four inputs. Tucked underneath the chassis in back is a damping control.

The KR works through two channels (Normal and Gain) with two inputs per channel, each with varying gain structures. 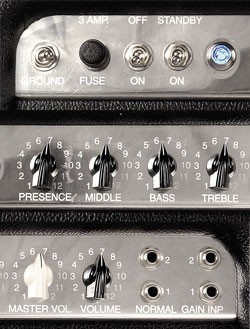 We tested the KR with the help of an ESP solidbody with Seymour Duncan humbuckers and a ’70s Fender Strat. We started exploring the KR’s tones by plugging the Strat into Normal 1 and setting the Master to full. Slowly dialing up the Volume control, the amp offered an incredibly warm, smooth, clean tone with fantastic high-end response that had absolutely no harshness. Low-end was big, full, and solid, and overall it made a very warm, very sweet clean Strat sound – rich, with great responsiveness. The KR ably offered every sweet frequency a player could ask for. As the Volume is dialed up, it introduces a slight overdrive that while it gets noticeably looser and gainier, never losing its warm sweetness. Plugged into Gain 1, the Strat made the same great tones, but with an incredible, solid blues breakup. The Treble and Presence controls seemed to bolster the tone more when we were plugged into this input.

Rolling the Volume up while rolling off the Master loosened the tone more with a lot of raw, natural distortion. Plugging the footswitch into Normal 2 made an even more raw gain as the Volume was dialed upward; we were getting a fuzz-like effect, with loads of gain. When we plugged the footswitch into Normal 1, the KR essentially took on a new personality. Taking the Volume up here, we definitely entered Fuzzville, as the amp’s sweet, clean disposition turned to nasty, gainy monster, with an abundance of fuzz and raw gain.

Through Normal 1, the ESP sounded clean, but not squeaky clean. Bumping up the Volume brought out a fat blues tone with nice breakup, while plugging into Gain 1 and tweaking the tone controls gave a thick gain structure. Turning up the Volume control here produces loads of distortion, while plugging the footswitch in either Normal input again produced loads of gain with a fuzzy edge.

Overall, it’s easy to hear how the KR would fit Keith Richards’ style. With its host of raw gain structures, the KR can sound like a sweet American amp, or it’s also happy playing the role of raunchy, raw Brit, and anything in-between, with plenty of tone unique to itself.