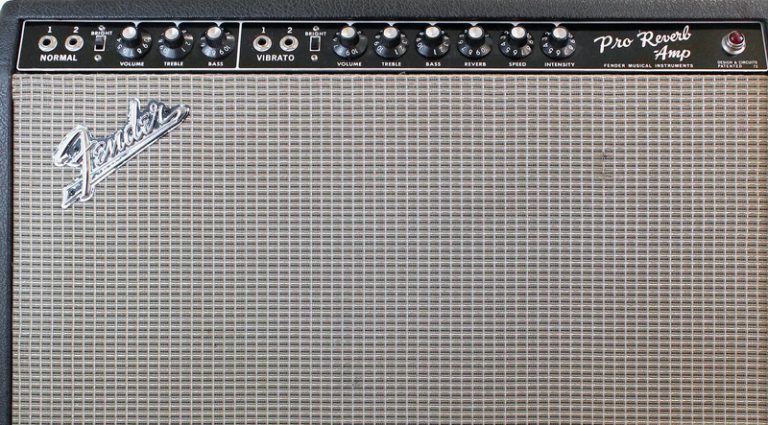 We tend also to ascribe pre-CBS goodness to blackface amps en masse, even in the knowledge that amps produced in ’65 and after were manufactured under the watchful eye of CBS. That’s as it should be, since most do retain full pre-CBS DNA because Fender was slow to change circuits, and several retained ’64-era specs into the silverface years of ’68 and ’69. The Pro Reverb, on the other hand, was never a pre-CBS amp; it arrived as a new model in ’65, and its 2×12″ cab signaled the death of the long-running 1×15″ Pro combo of the tweed, brownface, and early blackface eras.

So, should we treat it as some kind of ugly stepchild, unworthy of the admiration heaped on others of its ilk? Of course not! The Pro Reverb might have arrived after CBS had taken the reins, but its AA165 circuit was lifted directly from resolutely pre-CBS amps like the Vibrolux Reverb and Deluxe Reverb. Not too big or too small, neither over- nor under-powered, and with enough headroom for most modern gigs yet able to break up sweetly when pushed (shy of ear-splitting volumes), the Pro Reverb might be the best example of the versatile, utilitarian blackface combo.

The Deluxe Reverb has always been a hugely popular club amp, the Princeton Reverb likewise for smaller clubs and sessions. Stepping from 6V6s to 6L6s without adding a ton in size or weight, the Vibrolux Reverb 2×10″ has been declared by many the best all-round amp ever created by Fender. Well, we might posit that if you can only own one blackface combo and need to cover a diversity of gigs, the Pro Reverb makes a better choice. Its 2×12″ configuration gives it a deeper voice than the Vibrolux Reverb, yet it isn’t much more of a load. It has more headroom than the Princeton or Deluxe, yet its apparent volume isn’t so offensively beyond that of the larger 6V6-er – at least once you get it up into the sweet spot. The funny thing is, too, that a good Pro Reverb can often be had for significantly less cash on the vintage market than any of these other three, when considering amps of the same year and in similar condition.

Its few detractors point to the undersized output transformer (also found in the Vibrolux Reverb), which essentially makes it a 35-watter rather than 45 or 50. The smaller OT means a lighter, softer low-end response, as well as an earlier breakup. If you want firmer and bolder, move to a Super Reverb or even a Twin Reverb. Over the years, some have loaded Pro Reverbs with larger OTs, but a big part of the Pro Reverb’s charm stems from its easier/earlier onset of tube distortion and the full 6L6 tone without 50 watts of pummeling sound-pressure levels. It seems a shame to ditch a vintage OT (and its oft-desirable characteristics ) to make one of these into something else.

All that aside, the bulk of the Pro Reverb’s appeal aligns perfectly with any good reverb-and tremolo-equipped blackface combo. For many, it simply feels like home. Archetypal clean machines with a clarity and bounce that lays waste to the wannabe “rhythm channels” of so many lauded channel-switching creations. Yet crank them up a little and you’re rewarded with toothsome bite and sting that really makes blues and rock-and-roll leads sing.

The “blackface sound” comes from several ingredients that show how these were very different from the tweed models Fender was producing five years before. In that span – 1959/’60 to ’63/’64 – Fender redesigned the preamp and EQ stages in its amp, and while alterations were also introduced elsewhere, they entirely changed the sound and feel of otherwise similarly spec’d models. Tweed amps routed signal straight from the first preamp tube to a Volume control then on to the cathode-follower stage in a second tube that preceded the tone controls. Blackface amps, on the other hand, went from the first tube stage, through the tone controls, and finally to the channel’s Volume control before hitting a second tube stage. Add changes in coupling-capacitor values along the way, as well as different voltage levels at many points within the preamps (blackface preamps, more often than not, running on higher plate voltages), and you’ve got very different sound and feel. Where the tweeds were midrangey, chewy, and a little forgiving in the pick attack, with warmer lows and grittier highs, the blackfaces were scooped and precise, with firmly twangy lows and sparklingly cutting highs.

Yeah, these are just a lot of words, but plug into examples of one after the other and you’ll get the picture.

This particular ’66 Pro Reverb is a beautiful example. It’s had a long and active life, and is still out there and kicking. But it’s also in impressively clean and original condition. Most stock components have been retained, including the sweet blue Ajax “molded” signal caps that players and collectors like to see, with only a few power-supply resistors and electrolytic caps having been replaced to keep it functional. Its factory speakers were long ago removed. From the factory it had Oxford 12T6s (which proved unpopular), while a few were given Jensen C12Ns; if this was one of those, their absence is a real loss. The only other change of note is a 5R4 rectifier installed by the current owner in place of the GZ34 to bring plate voltages back down to period-correct levels – important for retaining tone and response.

Now loaded with a reissue Jensen C12Q and, for kicks, one of Celestion’s new Neo Creambacks, this Pro Reverb is a thing of sonic beauty. Plug in a good Tele, Strat, Les Paul, or ES-335, get the tremolo throbbing and dial the reverb until it’s just short of splashing, and there are fewer more-compelling sounds in vintage-amp land.