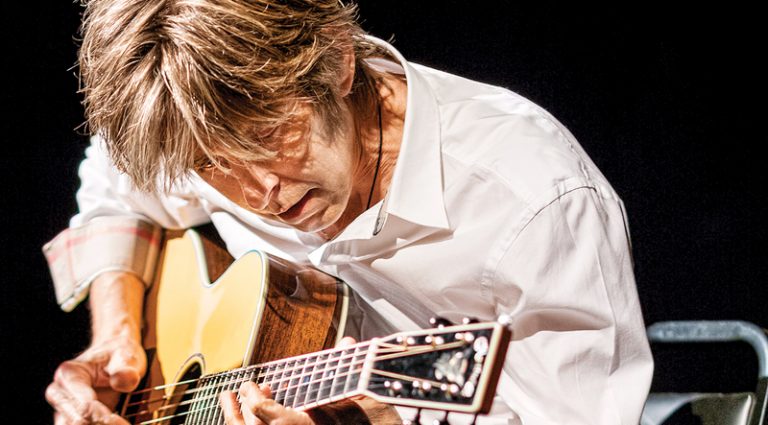 On Eric Johnson’s new – and first all-acoustic album – EJ, the guitarist takes a break from the intervallic inventions of his electric work and finds greater depth in his artistry, stripping away the non-essentials and exploring the purity of acoustic performance.

The compositions reveal an artist reaching for musical substance, humanity, and intimacy. On five tunes – “Wonder,” “Fatherly Downs,” “All Things You Are,” “Once Upon a Time in Texas,” and “Song for Irene” – he employs the 1980 Martin D-45 received as a gift from his late father. There are covers of Simon and Garfunkel’s “Mrs. Robinson” and “Scarborough Fair” – the latter highlighted by Johnson’s piano, and a nylon-string Ramirez is heard on the mellow instrumental “Serinidad.” “Wrapped in a Cloud” has Johnson accompanied by acoustic bass, cello, drums, and percussion, while a charming arrangement of Jimi Hendrix’s “One Rainy Wish” includes guitar and jazzy piano.

Known for a meticulous approach to making records, Johnson, unamplified and employing only a few microphones, relays a more-immediate feel thanks to being cut mostly live including a few tracks where he simultaneously played and sang.

You have a reputation for being a connoisseur of great electric-guitar playing, but you’re also a fan of Simon and Garfunkel. EJ includes covers of “Mrs. Robinson” and their version of “Scarborough Fair.”

A guy I work with who does road managing and sound for me sometimes also works with Art Garfunkel. He was out with Art and he said, “I work with this guy named Eric and he did an acoustic record. He did two Simon and Garfunkel songs.” Art looked at him and said, “Really? Why?” (laughs) He was kind of perplexed because he told him that I began it with a Simon and Garfunkel tune, and put another as the next to the last song. He was surprised (laughs).

I almost put three of their songs on it, but I didn’t want to be ridiculous. I could do the whole record as Simon & Garfunkel. I was thinking about putting “April Come She Will” or “Kathy’s Song” on there.

You could do more on another acoustic album…

Yes, and in fact I have 12 new acoustic pieces I’m planning on doing for Volume Two. I’ll start on it when I get back from this tour. I’ll probably do “April Come She Will.”

What made you want to record an acoustic album?

I’ve enjoyed folk and acoustic music since I was a kid; I got my first acoustic guitar and seriously started trying to play when I was 18, then got a bit of recognition on electric guitar. So that became what I did and I kept acoustic as part of my private life. It’s like getting a contract to be Andy of Mayberry and then you just go with it for 20 or 30 years. But at some point in the last few years, I thought I should do a better balance and include it for the public.

You have an idiosyncratic picking style with an acoustic guitar, which is really apparent on “Song For Irene.” Where does that influence come from?

On that tune, there’s some Chet Atkins and Merle Travis, but simpler. Most of that is like a James Taylor kind of thing – I’m a real fan of his playing. It’s so musical, with that groove. And it’s so dynamic, the way he lilts it with his voice. That kind of fingerpicking is more difficult than it sounds. Django, Paul Simon, Joni Mitchell, Andy McKee, Tommy Emmanuel, Doyle Dykes, and Doc Watson are great. John McLaughlin does beautiful things on acoustic.

If you listen to what Bob Dylan did – he was a pretty accomplished as a fingerpicker – he wasn’t going nuts, but he had a groove and he was playing the parts.

What is it about Paul Simon’s songwriting, in particular, that moves you?

When I was a kid, his songs were like chapters in my childhood. I remember how and where I was when those records came out, and they were killer songs – “For Emily, Whenever I May Find Her,” “Kathy’s Song…” I’ve always loved the sound of solo acoustic guitar – the early Joni Mitchell records, Song To A Seagull and Blue. Ladies Of The Canyon is, I think, one of the greatest pop records ever.

You made “Mrs. Robinson” all your own.

I was trying to think of something to open the record that was kind of a rocker, and that song came to mind.

Is it harder to make an acoustic record because of the vulnerability and humanity that has to translate?

Absolutely. You don’t have the same latitude to go into a studio and piece it together. I have a different opinion about that now with electric music than I did. If you would have asked me three years ago, I would have said, “Yeah, lets record the bass drum, then the floor tom.” But I don’t subscribe to that. There’s dance music, electronica, and rap and all that where that works great, but what I try to do won’t turn out as good as if I performed it.

I think that’s true of any music for me, personally, as a directive of what I want to do in the future. Especially with a solo acoustic instrument, it’s immediately more demanding. You basically have to go in and just sing and play it live. You’re capturing an event and a feeling. It would be less apparent with multi-orchestrated electronic music.

You have to find the balance between technical perfection and a visceral performance.

You chose to record yourself playing and singing at the same time.

I noticed that if I got into the right vibe and the right place, it kind of flowed. It started having this magic. It’s really a matter of you becoming a spectator. You become a part of the observer. Then this magic can happen. Anytime I’m thinking, “Look what I’m doing. I’m playing this acoustic part, I’m singing these songs,” the quality is not there.

That was the first thing where you have to go behind the curtain and look at all the constituents of how you feel and what you’re trying to say. Are you in a place emotionally or mentally where you are really clear with this? Is your intention to really be focused and make it happen and exemplify that emotion?

If you listen to the early Joni Mitchell and James Taylor stuff, your voice has to be balanced, decibel-wise, to the loudness of the guitar. My voice is too loud for my guitar. We had all sorts of trouble with the vocal mic or the guitar not bleeding into the vocal mic. I ended up almost turning the vocal mic off and there was plenty of vocal in the guitar mic.

I’m not accomplished enough as a singer to know how to turn down my voice, but a lot of singers, when they’re well-trained, know how to get the most use out of their air so they don’t have to sing as loud. They can balance it. If they’re playing an instrument at the same time, they can balance it together. There’s a negotiation of balance of the volume between your voice and your instrument. That was pretty tricky for me.

“…it’s no mystery why the electric guitar has become a bit archaic. We really squeezed the rag to the last drop…”

What did you record with?

I used a 1980 Martin D-45 and had the most luck with smaller diaphragm mics because they’re not as boomy. I used a Neumann KM56, which is a great mic for acoustic guitars. I also used a Maton guitar on one tune, an old Silvertone acoustic, and a Ramirez nylon-string on “Serinidad.”

Your duet with Doyle Dykes is a highlight.

He and I have been friends for years. I played on a couple of his tracks, and when I was doing this record I thought it’d be cool to have him on it. He’s such a fun player – he can do Chet Atkins and Merle Travis styles so well. “The World Is Waiting For The Sunrise” is like Les Paul and Mary Ford from 1951.

You play great piano on the record.

I played piano before I played guitar. I never became a super-accomplished pianist, but I can play pretty well and I’ve kept it up over the years. I decided to do more now because it’s close to my heart. I really enjoy it.

There’s all sorts of piano tunes that I have that I’ve never recorded and never done live. It’s one of the aspects of “me.” Three or four years ago, I started listening to my records and thought, “Where can I go from here?” I want to perform stuff more organically in the studio, so I can get a more-honest, sincere vibe.

I think there’s a way to make my music more profound or more interesting – for lack of a better word, make it better. It’s not “play louder” or “play faster” –  if I’m going to do that, I’ll just keep rocking out on electric guitar – it’s to be more sincere and musical, more honest to what you are, what turns you on, and what you’re feeling.

I also feel it’s more honest of me to show all the sides that interest me, where my heart is, in the same way of me making more performance-oriented records. I need to be more honest about all the music that I’d like to do, instead of just sectionalizing it into only guitar music or even into guitar/shredding music.

It sounds like you’re exploring things that attracted you to music in the first place. You’re not distracted by gear and techniques that don’t serve the musicality.

It’s almost like a roller coaster. Sometimes it’s more fun to be on than it is to watch somebody on the roller coaster. I see things where I’m doing a solo on electric guitar, and two minutes into the song I’m going, “Great. Wrap it up, Eric.” But five minutes later, I’m still having a lot of fun watching me play. “We don’t mind you soloing, but Jesus! You’ve said what you needed to say! Get to the last chorus!” (laughs)

It’s an interesting thing where you check-and-balance your perspective as the initiator, the listener, the spectator, or the doer. You realize that it’s no mystery why the electric guitar has become a bit archaic. We really squeezed the rag to the last drop, because we’re so intoxicated with that doer aspect instead of the spectator. But it’s all good; it’s just a matter of tempering it.

What’s next for you?

I’m going to Europe, then coming back to tour America next year. Then I’ll get on this Volume Two acoustic record and “April Come She Will.”