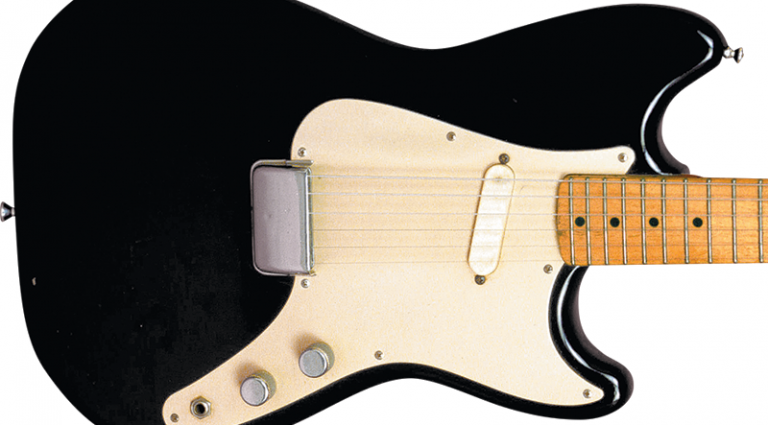 Often forgotten amongst Fender’s classic line of vintage electric guitars, the definitive (and diminutive) Musicmaster and Duo-Sonic student-grade models were conceived to capitalize on the fact teenagers were taking up the guitar in droves as Bill Haley and the Comets’ “Rock Around the Clock” rode the Billboard charts for 10 weeks in the summer of 1955.

Fender’s Sales division was acutely aware at the time that nobody would be using a Champion lap steel to try and emulate Danny Cedrone’s guitar solo, so it asked company president Leo Fender – known for his ability to devise a new product in as little as three months – to round out their Spanish-guitar offering with the two beginner models. Leo responded, and the first run of single-pickup Musicmasters was ready in early May of 1956.

Dubbed “¾ instruments,” Musicmasters had much shorter scale lengths and other features intended to make them attractive to a younger, more frugal student player. But today, veteran and neophyte vintage guitar collectors alike are intrigued by these little guitars, in part because they were made with the same care as their more costly siblings even if, compared to the Stratocaster, they were an evolutionary step backward. Here’s a year-by-year look at the history of the these entry-level axes.

Production began in April on the single-pickup Musicmaster. Sales manager Don Randall chose the name because he thought it “sounded kind of cute” and fit with the existing master-model monikers (i.e. Stringmaster, Bandmaster). Early examples differed in several ways, including having slightly thicker bodies made of ash, and some have areas that were hand-chiseled to fix mistakes in the initial tooling. Pickguards were aluminum, which may have been chosen for its durability (as beginners tend to be heavy-handed), but ironically, the black paint Fender applied did not wear well. So after the initial run, the guards were made of plastic.

To compensate for the first-run missteps, by May, the guitars were being made with the more-familiar 1950s appointments – one-piece, 21-fret, bolt-on maple neck with 22½” scale and a nut width of 15⁄8“. Like other Fender necks of the era, the truss rod was installed through a rout in the back of the neck, and a walnut “skunk stripe” filled the channel. And Fender’s ¾ neck profiles always mirrored the chunky V shapes of the necks on Telecasters, Esquires, and Stratocasters of the era, along as well as the standard narrow fret wire.

The ¾ guitars also had the exact headstock dimensions as seen on the Stratocaster, with a single butterfly string retainer and six-on-a-side “single-line” Kluson Deluxe tuning gears with white plastic buttons. The earliest examples (from March through June of ’56) were fitted with the “no-line” Kluson machineheads. A silver “spaghetti” logo decal was affixed to the headstock of the Musicmaster, while the later Duo-Sonic would get a gold logo. The model name appeared under the Fender logo, slightly to the right, in small upper-case letters framed in quotation marks.

Bodies were solid poplar or similar wood, usually in two or more laminated pieces, always routed for two pickups (regardless of final configuration). These were finished in Desert Sand, the beige color used on many Fender steel guitars. And because they were not sealed with a clear coat of lacquer, they were less prone to yellowing compared to other Fenders of the era.

Each Musicmaster had a small, rectangular, chrome-plated metal bridge. Strings were installed from the top, and rested on three adjustable steel saddles (the same ones found on Telecasters and Esquires) and topped by a removable chrome-plated bridge cover. A gold-anodized aluminum pickguard/control plate replaced the black-painted guards; this harnessed the volume and tone potentiometers, the ¼” jack, and the single, angled neck pickup (on the Duo-Sonic, this plate also housed an additional bridge pickup and three-way toggle switch on the upper treble bout). These pickups were black-bobbin single-coils with polepieces milled flat on top to accept the solid, white plastic pickup cover. The same pickups, wired in the same way, were used on the Musicmaster and Champ steel! The control panel’s details were finished off with chrome barrel knobs, as seen on all Fender guitars except Champs and Strats.

The first known production run of Duo-Sonics began in June, and both models were produced concurrently until the late 1960s.

Throughout 1958, Musicmaster and Duo-Sonic necks gradually became narrower at the nut until they reached the so-called “A width” of 1½”. The solid steel saddles were replaced with threaded saddles, the application of clear lacquer made the anodized finish more durable on the pickguard, and Fender also offered a “utility case” for $10 less than the standard hardshell case.

In the late spring, maple necks on all Fender guitars were fitted with a slab (milled flat on the bottom) rosewood fingerboard and clay-dot position markers. The truss rod could be installed through the top of the neck prior to gluing the fingerboard, so the rout on the back was no longer necessary.

At the same time, the standard color was changed from Desert Sand to a darker tan with a pinkish hue, the name of which was never heavily promoted by Fender. Also, the body routing was altered slightly (a hump appeared in the control cavity) and four more screws were added to secure the pickguard. The metal guard was replaced with a cream-colored single-ply plastic guard with beveled edges with a thin aluminum shield on its bottom to guard the pickup assembly against electronic interference, and simplify grounding. The white plastic pickup covers were changed to a dark brown, a color used exclusively on Musicmasters and Duo-Sonics.

A letter to dealers in July, 1961, announced that Musicmasters and Duo-Sonics would be finished in sunburst only. This apparently was a request from dealers, who perhaps believed it’d be easier to up-sell or transition a customer to a Jazzmaster or Stratocaster if their little brothers looked a little more like them. However, sunburst on the ¾ guitars was different in that it was yellow in the middle and transitioned to red, then maroon with no black on the outer edge. And it was fairly opaque compared to the standard Fender sunburst of the time. Most (if not all) of the early sunburst ¾ guitars were sprayed over a tan finish, suggesting leftover paint was used as an undercoat. These were fitted with a white one-piece plastic pickguard with beveled edges, and the same brown pickup covers. 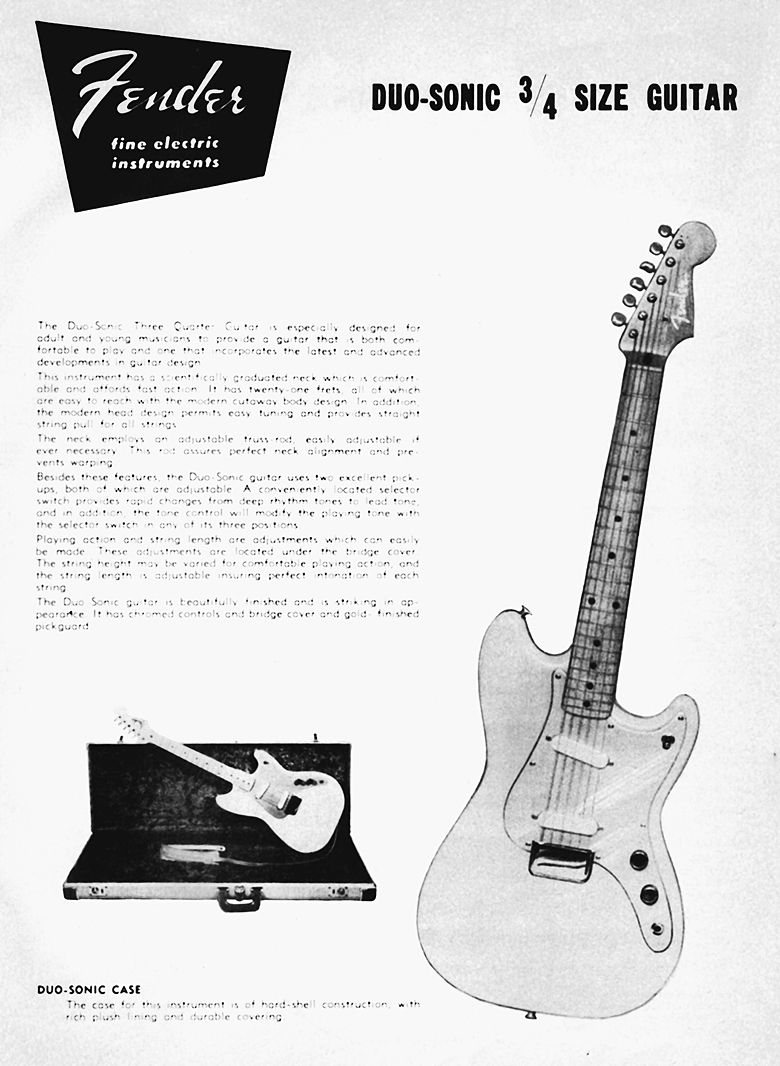 In mid 1962, the slab rosewood fretboard was replaced by a curved, veneer rosewood board that became still thinner as the year passed.

In 1963, Fender began making four variants of ¾ guitar. For the first time, budding guitarists had more than one color option. Sunburst was dropped mid-year in favor of white and “Red-Mahogany.” Perhaps this was a reaction to the color found on competitors’ student models. It was, however, more likely a cost-cutting measure (spraying one color takes less time) as even these colors would have looked pretty dull compared to something like a Gretsch Princess or a TV-finished Gibson SG Junior.

White Musicmasters and Duo-Sonics were fitted with a nitrocellulose tortoiseshell pickguard and white pickup covers. Another variant was produced in the autumn, with a single-ply dark brown pickguard. Today these are quite scarce, as they were produced for only a month or two.

Red-Mahogany was probably Fender’s answer to Gibson’s Cherry Red. This translucent finish appeared sporadically in 1963 and ’64, and was initially offered on mahogany-bodied guitars, but by ’64 was also applied to the “regular” woods, like poplar. These guitars were normally fitted with white guards and black pickup covers.

The use of mahogany as a body wood was uncommon at Fender, but examples have turned up on most models from this era. This may have been Fender’s attempt at going head-to-head with Gibson’s Cherry Red SG Junior and SG Special models. Red-Mahogany ¾ guitars were not produced in large quantities, and the properties of the paint made it more susceptible to checking and cracking, so it’s difficult to find a guitar today with the finish intact. 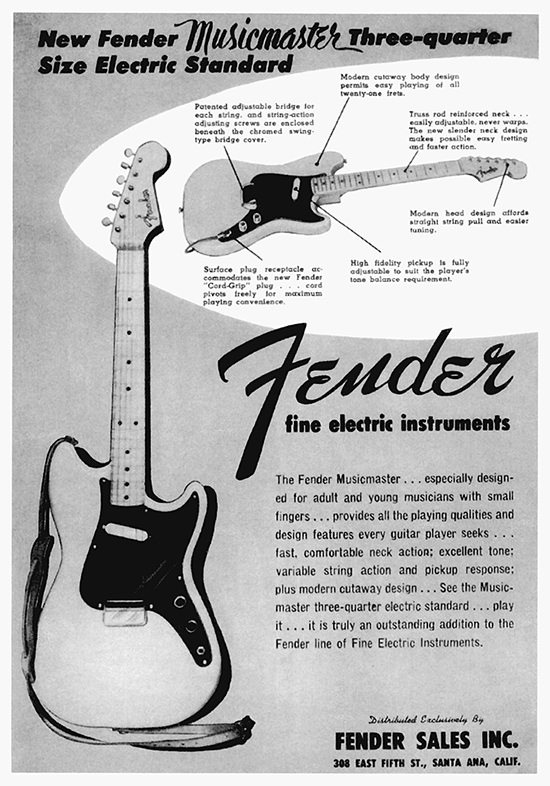 In the spring of ’64, a major re-working of the “student guitar” line was afoot, and August saw the debut of the Mustang – essentially a Duo-Sonic with a vibrato bridge. The Musicmaster and Duo-Sonic each received an extensive facelift to make them match the Mustang cosmetically, and all three were offered in “full-scale” (24″) and short-scale (22½”) versions. These “II series” guitars had a body altered with a slightly offset waist and a headstock with a new size and shape unique to the ¾ guitars.

The bridge plate was noticeably enlarged and modified such that it could no longer hold a chrome cover. It remained top-loading, though, with the same three-saddle arrangement. The redesigned bridge size and placement could accommodate intonation for either short- or long-scale necks.

Body routings were changed to accept the redesigned pickup and control layout (and the Mustang’s vibrato), and a total of 15 screws now held the pickguard/control plates in place (12 and 3 respectively). The thin metal shielding was discarded in favor of four metal ground plates inserted into the bottom of the body routings. 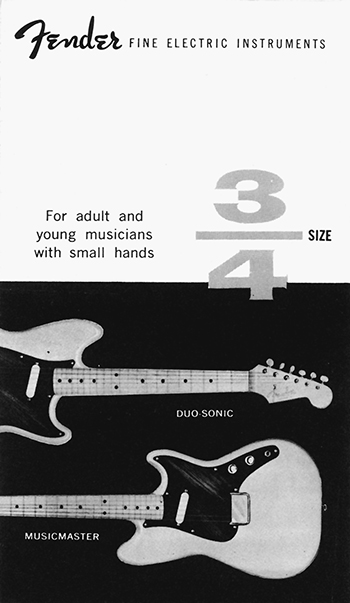 The bridge pickup was slanted to align the polepieces with the strings, and the neck pickup was moved slightly toward the neck; this may have been another concession for the long-scale neck. The pickguard was separated from the control plate, and it received an outward-rounding curve on the low-E side.

The two-pickup ¾ instruments received a pair of slider switches in the low-E side of the pickguard. Controlling each pickup separately, they turned the pickup off in the middle position, and changed the phase of the pickups. Several combinations of pickups and phasing were possible.

The separate control plate was chrome and housed the volume and tone pots, as well as the input jack. The knobs were changed to a skirted black plastic type already in use on the Jazz Bass, Jazzmaster, and Jaguar. And at some point in ’64, the Musicmaster and Duo-Sonic were shipped with a thicker gold “transition” Fender logo, with their model name in slightly bolder print.

All redesigned Duo-Sonics and Musicmasters were part of the II series, regardless of scale length or the label on the headstock. It’s a common mistake to refer to only long-scale examples as II series, a distinction Fender never made.

In late ’64, the clay-dot position markers were replaced with pearloid dots; overlaps occur where pearl top and clay side markers appear. The pearl dots were slightly larger than the clay, but the spacing of the double dots at the 12th fret remained the same. Double-line Kluson Deluxe tuners, with white plastic buttons, also appeared at the end of ’64. Finally, the nitrate pickguard, which had proven prone to shrinkage, warping, wrinkling, and discoloration disappeared at year’s end, replaced by plastic.

The versatility of optional scale lengths, a design feature of the II series, ultimately doomed the ¾ scale neck, as players expressed a strong preference for the 24″ scale length, which Fender offered at no additional cost. 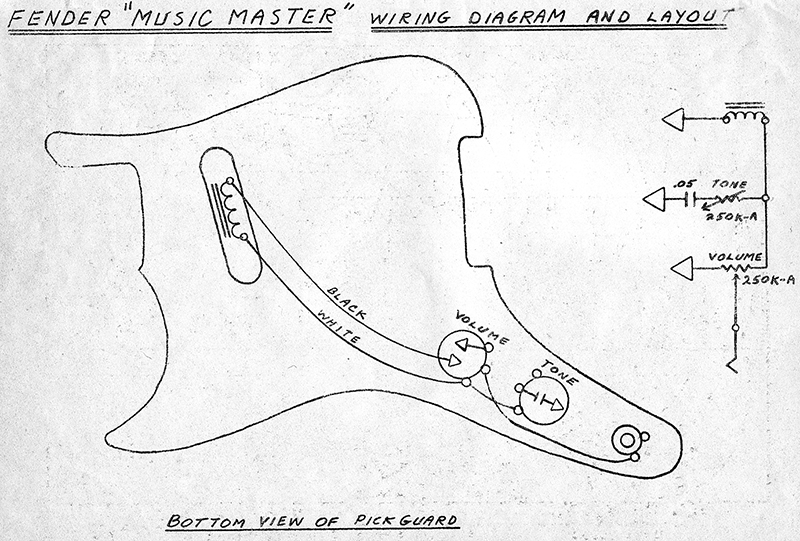 Plenty of guitarists and collectors, when lacking the liquid capital for a decent ’50s Strat, have turned to the Musicmaster and Duo-Sonic as an affordable connection to Fender’s golden era. And although the market for early ¾ guitars has picked up, clean examples can still be found for less than twice their original retail price… adjusted for inflation!

So, consider celebrating the 50th anniversary of Fender’s original Musicmaster and Duo-Sonic by trying one for yourself. For the purist, they offer a lot of history and plenty of vintage feel, tone, and vibe.

Terry Foster and Tim Pershing are avid collectors of all things Fender. Foster is a noted authority on Fender Musicmaster, Duo-Sonic, and Mustang models. This article originally appeared in VG July 2006 issue. All copyrights are by the author and Vintage Guitar magazine. Unauthorized replication or use is strictly prohibited.

The City of Guitars

The Story of Nudie’s Mosrite Mandolin