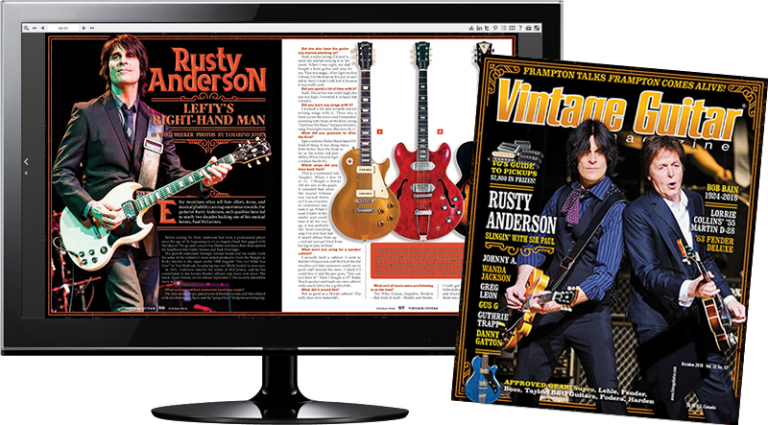 Elite musicians always bring effort, focus, and musical pliability. For Rusty Anderson, they’ve led to nearly two decades backing one of his musical heroes. We also interview L.A. metal-guitar vet Greg Leon, who played the Strip alongside now-legendary fellow shredders. Plus, we tell all about the Jacobacci Major Ohio, a pre-production Fender Deluxe, the evolution of Martin’s 000-42, and rockabilly goddess Lorrie Collins’ Martin D-28. Other interviews include Guthrie Trapp, Wanda Jackson, Gus G, Johnny A., Ian Moore, Steve Kimock, and Matteo Mancuso. We pay our respects to studio legend Bob Bain, and introduce a new monthly feature – “Pop ’N Hiss,” which takes a fresh look at the albums that made us want to pick up the guitar. The series opens with Frampton Comes Alive!. Let our “Hit List” reviews help you choose the best new music, and VG Approved Gear guide your next big purchase. You’ll want to dig way into the October issue, available now!

36 12 Frets (Or More) Clear
The Evolution of Martin’s 000-42
The exact origins of the design are lost to history, but guitars with 12 frets clear of the body arose for obvious reasons. We offer a look at how the 000-42 exemplifies “progress” to the 14-fret. | By George Gruhn and Joe Spann

40 Mother of Invention
The Jacobacci Major Ohio Label de Qualité
After World War II, GIs stationed throughout Europe exposed locals to American music propelled by electric guitars. Europeans wanting to play quickly learned that American guitars were hard to find – and expensive. Local makers responded with innovative designs. This is one of them. | By Michael Wright

44 Early Adopter
A Pre-Production Fender Deluxe
Amp-o-philes get excited by flagship Fenders like those with a “TV front” or wide (or narrow!) control panel. But, stepping stones and in-betweens like this one are often even more fascinating. | By Dave Hunter

86 Rusty Anderson
Lefty’s Right-Hand Man
Elite musicians often tell how effort, focus, and musical pliability can reap enormous rewards. For this guitarist, those qualities have led to nearly two decades backing one of his musical heroes. | By Ward Meeker

94 Greg Leon
Hard-Rock Doyen, Wizard Amp Tech
For every player who reaches superstardom, there are a million stories of destiny turned sideways. Forty years ago, Greg Leon was an L.A. shredder who went toe-to-toe with Rhoads, Lynch, and Van Halen. Here’s his story. | By Oscar Jordan

28 Johnny A.
Me and My Guitars

30 Ian Moore
Looking For The Sound

76 Shop of Hard Knocks
Sudden Death: Rebuilding an Output Transformer | By Will Kelly