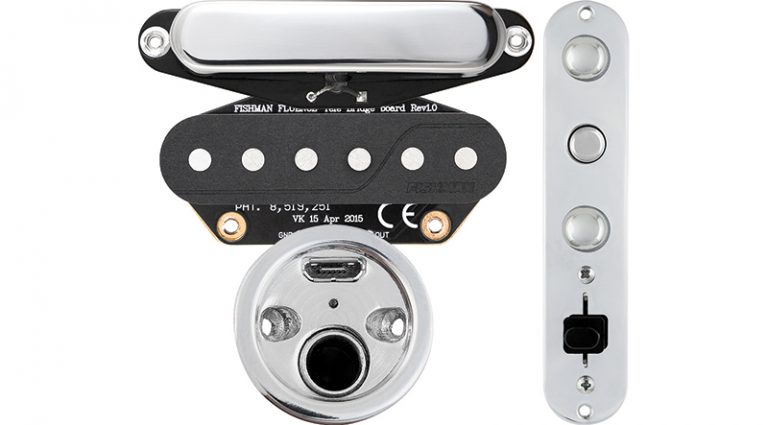 In 2014, Fishman introduced their Fluence line with the goal of combining vintage tone with freedom from the inductance problems that impact even the most hallowed vintage pickups. Rather than traditional windings, Fluence pickups incorporate two 48-layer boards, seemingly resulting in zero noise.

Designed to be installed without requiring permanent modifications, the Gristle-Tone set comprises a a drop-in control plate with three-way switch, pots, jack and cup, and a Fluence rechargeable lithium-ion battery pack. The only noticeable difference from a traditional Tele plate is a flush voice selector button between the Volume and Tone controls. The internal battery pack connects to a USB port discreetly mounted in the jack plate for easy recharging (Fishman claims that rechargeable battery life is 250 hours; the set was tested for for hours without any degradation of signal).

The test pickups came installed in a Fender Custom Shop Tele that was played through a ’66 Fender Vibrolux Reverb and a 1965 Vox AC30. The Gristle-Tone-equipped Tele played nicely with the usually noisy AC30 and sounded the same at any volume level.

Through the low-noise Fender amp and with the voice-select button in the “out” (whiteguard) position, the Gristle-Tones provided a variety of usable clean tones. The setting would be ideal for both clean and airy rhythm work or twangy Bakersfield tones reminiscent of Don Rich.

The real fun, however, began with the voice-select button in the “in” (blackguard) position. The tone was instantly fattened and sustain increased, all while retaining the Tele twang. Rhythm tones retained the trademark Tele clarity, and single-note soloing was juicy and delicious, with harmonic richness that seemed to lead to the next note.

Offering modern convenience and flexibility while retaining classic Tele tones are these pickups’ calling cards. Indeed, the Gristle-Tones may offer both clean and hot tones, but rest assured – those multiple voices most certainly are not in your head.