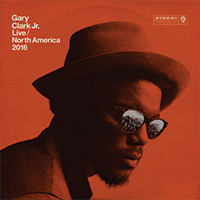 Gary Clark Jr. has brought back the soaring psychedelic blues-rock guitar solo. After a backlash of post-Hendrix overkill, replaced with severely articulate blues Nazi-approved Chicago and West Coast swing vocabulary, the pendulum is returning to the center – thanks to Clark. But that’s not all he does. Clark sings like he means it, and his voice resonates with personal conviction.

This live collection features cherry-picked songs from his 2016 tour supporting The Story Of Sonny Boy Slim. Performing material from that album like “Grinder,” “Our Love,” and “The Healing,” these songs are taken to fresh new places. Clark is simply feeling everything. His fuzz and hollowbody guitar recipe is powerful and incandescent throughout.

He channels the masters with covers of Elmore James’ “My Baby’s Gone” and Jimmy Reed’s “Honest I Do.” His performance of “When My Train Pulls In” from Blak and Blu is used as a vehicle to marinate within a hypnotic rhythm section and take his sweet time, stretching out with wah-laced intensity and emotional lyrics. This is offset by the smooth falsetto love ballad “Down To The Ride.”

This album has something for everybody.