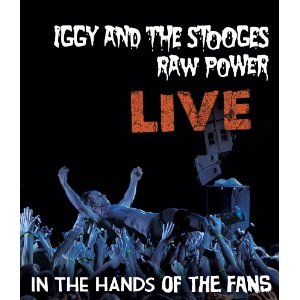 In 1973, the Stooges were newly reformed yet seemingly on their last legs. Their early attempts at Raw Power, their third and last album before breaking up again, were rejected by management, although tracks surfaced on subsequent bootlegs.

James Osterberg, better known as Iggy Pop, enjoyed a successful solo career, especially in Europe, before the band reunited in 2003. By this time, original bassist Dave Alexander was long since dead, and, having quit, been replaced, and rejoined at the time of the Raw Power sessions, original guitarist Ron Asheton was relegated to bass. He was replaced by Power’s equally primordial James Williamson on lead, while younger brother Scott Asheton held down drumming chores.

Sadly, the elder Asheton died of a heart attack a year before the latest edition of the Stooges (with Iggy and Scott the only remaining originals) recorded a live performance of the entire Raw Power album at the All Tomorrow’s Parties Festival at Kutsher’s Country Club (Monticello, New York) on September 3, 2010.

MVD’s vinyl-only release of the show proves the staying power of both the band and album. The sequence may be jumbled (the title track now opens the show), but all eight songs are here. The addition of “I Got A Right” is apropos, since it was coupled with “Gimme Some Skin” on the aforementioned boot singles.

Williamson’s crunching, ripping guitar is onboard, with Mike Watt on drums and Steve Mackay on sax. With 63-year-old Iggy leading the way, the quintet sounds like a force of nature – think earthquake, tsunami, volcano – more than validating the underrated instrumentalists as, in their leader’s words, “a crack band in a class of our own.”