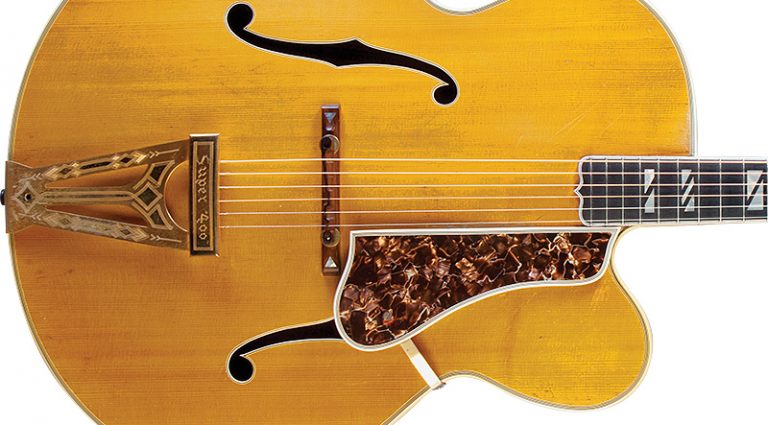 The Gibson Super 400 debuted in 1935 as the first production-model 18″ archtop guitar with f-shaped sound holes; 30 years prior, the company’s Style O was the same size and same shape, but had an oval sound hole.

Throughout the swing/big-band era beginning in the mid ’30s, the Super 400 was the epitome of an orchestral rhythm guitar, and ultimately came to represent one of the finest guitars in modern jazz. Its ornamentation was higher than any other factory-produced archtop and, at $400, it was more expensive than any other Gibson guitar in 1935.

The first version, which collectors reference via its smaller upper bout, was built from 1935 through ’36. A non-cutaway with a sunburst finish, its upper bouts measured 12¼″, its scale was 24¾″, and its sound holes were 61/8″ long by 1/8″ wide at the point. By ’36, its sound hole had increased to 715/16″ by 11/8″ wide at the points. Initially, it was offered with an optional thin or thick X-braced top, but a single thickness became the norm in mid ’36. The first tuners were engraved open-back Grovers.

The second version, built from ’37 through ’41, was also a non-cutaway with a sunburst finish, though natural finish was available for an additional $10 beginning in ’39 (Alvino Rey received a blond Super 400 in ’35). The second version had larger upper bouts (135/8″), a long scale (25½″) and the sound holes that were 715/16″ long x 11/8″ wide at the points. The fingerboard radius was decreased and it had a slimmer neck. Sealed Kluson tuners were used beginning in ’38, and the following year saw the tops get parallel braces and the debut of the Varitone tailpiece. Those with blond finishes were also given a neck-cord assembly on the back of their pegheads.

In ’39, Gibson created a third version of the Super 400 – the Premier. The first sample shipped in August, and it differed in several important ways. First, it had a Venetian/rounded cutaway on the treble side. To suit the change, the neck block was made smaller, the pickguard shortened, the neck was set shallower, and the fingerboard was glued flush to the top (like an L-30 or L-50). In 1940, Gibson altered the Premier’s neck angle, which elevated the fingerboard as on other Super 400s. By that time, every Gibson archtop beginning with the L-7 and higher in price had elevated fingerboards.

From the start, the Premier was available in natural finish or sunburst. Like the non-cutaway second version, the Premier had the larger upper bout and longer scale (25½″), all were parallel-braced and had a new measurement (613/16″ long x 11/8″ wide at the points) for their sound holes. They all had the Varitone tail, with ’39 models readily identified by the “Pat. Pending” engraving on its end.

Between 1939 and ’43, Gibson shipped a total of 35 Super 400 guitars in the blond finish with the Premier cutaway option. This makes the model rarer than the pre-war Martin D-45. It’s interesting to note that for the price of a Super 400 Premier ($425 with case) you could have two Martin D-45s (without cases), four Martin D-28s (with change left over), or five Gibson RB-75 Mastertone banjos and a couple of hardshell cases for them, as well. The Super 400 was the only pre-war Gibson instrument priced with a case.

Production the of Super 400 Premier ended in ’41 with a few leftover guitars shipping throughout ’43. There’s a growing body of evidence that suggests Super 400s were built in small batches, perhaps five at a time.

The instrument featured here is an early Super 400 Premier, built in ’39 (serial number EA 5589). It shipped November 24, 1939, to the J.W. Jenkins & Son store in Topeka, Kansas – a long-time Gibson dealer with locations in Oklahoma, Kansas, and Missouri and a home office in Kansas City, Missouri. It was repaired at the factory in ’49 and returned to Hulling Music House, a Gibson dealer in Des Moines.

The back and sides of this Premier are beautifully figured maple. Lumber for guitars in natural finish had to be clear of mineral streaks and other deformities, and this maple likely came from Nichols & Cox Lumber Company of Grand Rapids, Michigan. Before World War II, Gibson purchased northern-Michigan curly maple from a half-dozen suppliers, with Nichols & Cox being the most consistent. The top is Adirondack spruce Gibson purchased from Julius Breckwoldt & Son in Dolgeville, New York, makers of piano soundboards and other parts. The Edward Hines Lumber Company, Chicago, and Posey Manufacturing Company, Hoquiam, Washington, were alternate sources.

The Super 400 was bound in alternating white and black celluloid supplied by the Celluloid Company of Newark, New Jersey; the top had seven plies, the peghead and pickguard five plies, and the back, sides, sound holes, heel, and fingerboard have three plies. The pickguard is celluloid with a unique red-brown “marbled” look – some shipped with white pearloid pickguards. The pickguard bracket and attachment screws are all gold-plated.

The three-piece neck is curly maple with a dark center strip and has a slim, modern feel. It joins the body at the 14th fret. This particular guitar has the shallower neck set, with a fingerboard flush to the top. The peghead is the classic Gibson “open book” design with a mother-of-pearl script logo, split-diamond inlays, and a white/black truss rod cover with matching art-deco styling. The peghead is gently tapered and there is no volute or handstop. The rear of the peghead has a black veneer which narrows to an elegant point on the back of the neck. It is inlaid with a three-piece mother-of-pearl motive which echoes the design of the other inlays. The heel is capped and engraved with the words “Super 400.” The tuners are gold-plated/sealed Grover Imperials with an art-deco design; these were an option to the Kluson Sealfast beginning in ’39. The serial number is die-stamped at the top rear of the peghead.

The ebony fingerboard has split-block mother-of-pearl inlays and ends in a graceful point. It also has a large radius and 20 frets with 18 easily accessible due to the Venetian cutaway. Prior to World War II, Gibson purchased all of its tropical hardwoods (rosewood, ebony, mahogany) through two major suppliers, J.H. Monteath, of New York City, and C.H. Pearson & Son, in Brooklyn.

The finish is clear nitrocellulose lacquer. Gibson began spraying lacquer with DeVilbiss guns as early as 1925. Their long-time primary lacquer supplier was Forbes Varnish Company, of Cleveland. Various Gibson catalogs claimed the finishes were hand-rubbed, yet photos of the period show machine-operated buffing wheels. They definitely used additives/smoothers to shorten the finishing process.

The gold-plated, engraved Varitone tailpiece was a continuation of the art-deco motif. Its diamond engraving was highlighted with satin-matte and bright finishes. Gibson used several outside vendors for engraving and gold-plating. This particular instrument has the “Pat. Pending” engraving which identifies it as an early part. The Varitone was engaged by using an Allen-wrench to lower a small cylindrical brass unit from the tailpiece down onto the top, changing the elevation of the tailpiece and muting the vibrations. While the part did function as advertised, it also caused damage to the top when over-used.

The Super 400 was housed in a beautiful Geib hardshell case with a brown leather covering and five heavy-duty latches. The interior was covered in a rich red-purple plush that gave an opulent presentation. A zippered-canvas slip case was included.

The level of craftsmanship in the Super 400 was consistently superb. They are beautiful works of art as well as eminently usable instruments. It is evident that the guitar which greatly defines the era was both thoughtfully designed and carefully executed by Gibson workers.