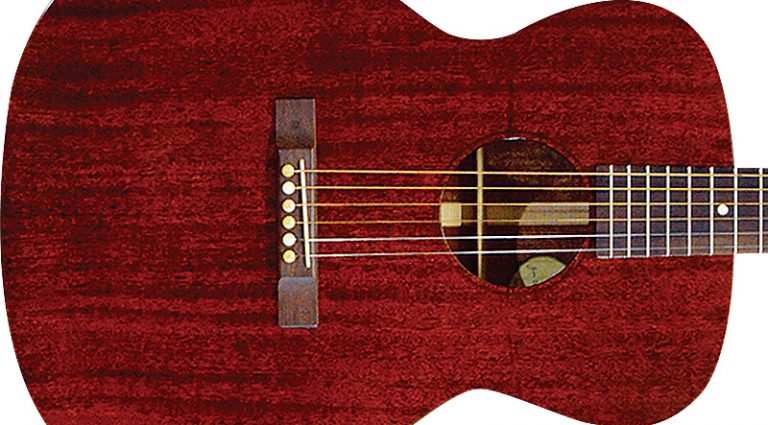 Echopark Guitars is the brainchild of Gabriel Currie, who opened the establishment in 2006, after many years of working as a builder and repairman. Currie’s first offerings were electric instruments that have found their way into the hands of Joe Perry and Brad Whitford from Aerosmith, as well as Jakob Dylan of The Wallflowers.

But Currie also builds acoustic instruments, including an all-mahogany-bodied 000 model that he calls his Traditional American Acoustic, and which is inspired by the great auditorium-sized Martin 00 and 000 Models 15 and 17 mahogany guitars of the ’30s and ’40s.

The mahogany comprising the Traditional American Acoustic’s top, back, and sides is old-stock figured wood, while the one-piece neck is made of old-stock Honduran mahogany, as are the curfed linings. Old-stock Carpathian spruce is used for the scalloped bracings, and the bridge plate is made of big leaf maple. The base-price version uses old-stock Indian rosewood for the fretboard and saddle, but for an additional $1,450 the buyer can get old-stock Brazilian rosewood from Currie’s grandfather’s stash.

Specifications for the Traditional American Acoustic include tape-reinforced sidewalls, 111/16″ neck width at the nut, and a 14-degree head pitch with tortoise nitrate headstock veneer. The body has a 41/8″ depth at the lower bout and the soundhole is 37/8″ in diameter. The neck profile on the review sample was what Currie calls his “1955 medium D neck profile,” but you can have anything from a 1946 V to a 1959 D. The guitar is available with either a through or drop-in saddle (the review sample had the drop-in version).

Overall fit and finish of the test guitar, a base model, was first-rate. Cosmetics are understated to the max, with only small dots as fret markers and no binding on the top, back, or fretboard. Attention to detail was equal to the best custom instruments I’ve seen. The setup was also perfect.

Sonically the Echopark Traditional American Acoustic scored high points. It was a responsive and well-balanced instrument that still sounded “green” but had the potential to become a tone monster. Individual note definition when driven hard by a flatpick was excellent. Fingerpickers will also find that even complex picking patterns emerge clearly and cleanly. Simply a beautiful instrument.