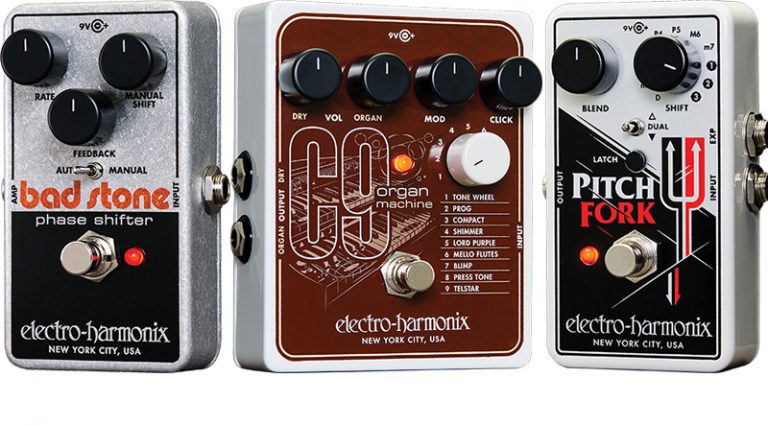 When it comes to stompboxes, there are the standard go-to effects that every guitarist, whether a gigging musician or a bedroom noodler, seems to have in his or her arsenal. Then there are those pedals that push an electric guitar’s sonic possibilities even further into the stratosphere. Recently, three boxes from Electro-Harmonix landed on our test bench, and all are firmly lodged in the latter category.

EHX’s original Bad Stone phase shifter was released in 1977, and this analog reissue is similar in design but tweaked for modern players by offering even slower speeds of modulation. It’s a six-stage phaser, meaning there are six filters of signal hocus-pocus. For the lay guitarist that means more swirling, goopy sounds with which to play around. The box has just three knobs – Rate, Feedback, and Manual Shift – but it can be thought of as two pedals in one.

The Bad Stone’s first section features a classic phaser, allowing players to dial in all manner of ’70s tones, from the great Robin Trower to Little Feat’s Paul Barrere (one of rock’s underrated phase-shifter heroes). With the Bad Stone, you can also summon timeless textures for the Doobie Brothers’ “Long Train Runnin.’” Van Halen’s metal-infused “Unchained,” or the Big Star gem “The Ballad of El Goodo.” If you like the deep sounds of the Small Stone, EHX’s best-selling pedal of all time, you’ll find plenty to dig here.

The Bad Stone’s second section is activated by the Auto/Manual switch which can “freeze” a phaser stage you like. Then use the Manual Shift knob to further tweak the EQ, sort of like the sound of a cocked wah-wah pedal set to a single position. Using this circuit, the Bad Stone can function as a tone tool to capture a singular effect or EQ sound. Flip the switch back to Auto for a return to swishy, pulsating phase-shifter heaven. The Bad Stone is a useful, attractively priced small-footprint pedal.

EHX’s Pitch Fork is a digital polyphonic pitch shifter containing a huge array of tones. Use the Shift knob to choose an interval, such as minor 2nd, major 2nd, major 3rd, perfect 4th or 5th, major 6th, minor 7th, or three full octave jumps. The Mode toggle determines whether the intervals go up (treble range), down (bass), or a mix of both. Then twist the Blend knob for the right mix between dry guitar tone and the Pitch Fork effect. In this manor the Pitch Fork allows you to select a range of intervals and harmonies to complement your licks. And remember, it’s polyphonic, so feel free to play chords as well as single notes. The octave range can yield deep electric-bass sonorities or, going up, ringing chimes similar to Nashville tuning or even mini 12-string guitars from Munchkin Land (you’ll know it when you hear it).

The Latch button is cool, too, turning the Pitch Fork into a “momentary” switch – just use the footswitch to trigger the effect for as long as you press down. Better still, plug an expression pedal into the Exp jack for all kinds of whammy fun. The Pitch Fork can open a range of notes that would be impossible to find on a standard guitar.

Finally, the C9 Organ Machine is a digital box that may just blow your mind. Inside are nine realistic organ simulations, such as the legendary Hammond, Farfisa, and Vox keyboards of yore. Controls include Dry (controlling guitar volume) and Organ (controlling organ-effect volume), plus Modulation (for a swirling Leslie effect and speed), and Click for that crucial bit of organ noise.

Settings for Prog and King Purple will tickle Hammond fantasies as you strum giant organ textures. Shimmer adds a New Age string pad, while Telstar evokes warbly, early-’60s Vox Continental surf-organ sounds. Granted, guitarists have been able to get organ sounds before, but with cumbersome guitar-synthesizer units. Here, Electro-Harmonix offers a plug-and-play box. Honestly, it’s one of the most exciting stompboxes we’ve plugged into.