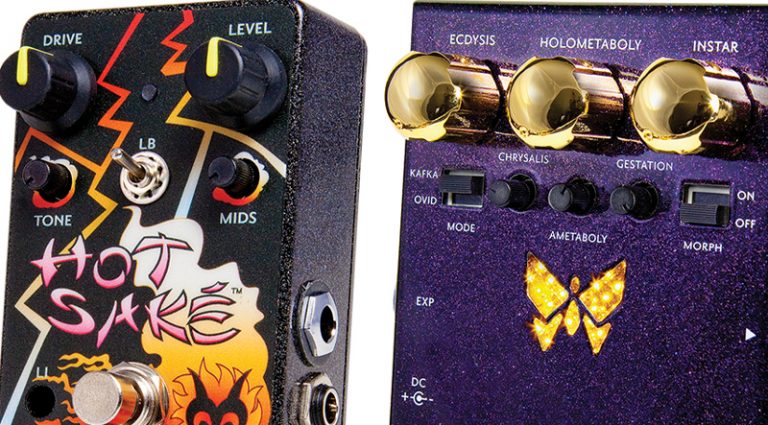 TWA’s Hot Sakè is based on revered old-school Japanese circuits, notably the SD-9 overdrive, kicked up with some special sauce. Roughly MXR-size, the box works as two pedals in one: an overdrive and a distortion. The controls will be familiar to most: a Drive knob to dial in the amount of gain, and a Level knob for overall output. The Tone control is a passive lo/hi boost, but the Hot Sakè also has a Mids knob, which is an independent EQ that can boost the midrange spectrum. Accessed through an opening in the housing, an L1/L2 switch lets you choose between two filter caps for different tone choices.

But the secret weapon is the LB switch, a magic button that takes the Hot Sakè from overdrive to raging distortion box. But let’s be clear: both circuits are cool and interesting. With the LB switch off, the Hot Sakè is a superb overdrive; running the box through a 1×10 tube combo led to a great range of off-clean to dirty tones. Particularly thrilling are the vintage Jimmy Page- and Ritchie Blackmore-styled settings, especially good with single-coil pickups and a cranked amp. From “Good Times, Bad Times” to “Burn,” these vibrant overdrive flavors are just killer.

With the LB switch flipped on for a low-end boost, the Hot Sakè delivers fat fuzz and distortion with reams of sustain. Frank Zappa would dig this setting, which recalls his classic mid-’70s SG tone. Paired with the right tube amp, the Hot Sakè really is two dirty boxes in one that will deliver tons of vintage overdrive.

Speaking of Zappa, he likewise would have dug the TWA Dynamorph, an “envelope-controlled harmonic generator.” If you have no idea what that means, don’t fret. In simple terms, this box produces all kinds of gnarly eight-bit fuzz and twisted envelope sounds that will make your guitar sound out of this world. There are knobs with names like Chrysalis, Ametaboly, and Gestation, and believe it or not, they all have real-world jobs. (You can even plug in an expression pedal to control some functions in real time.)

The Dynamorph has two high-gain preamps and a bunch of rectifiers to torture your guitar tone into submission. Besides all the insane, synth-like fuzztone and envelope-swelling effects, it’s interesting to see how interactive the pedal is with pick attack and volume. Unlike many stompboxes that are simply “on,” the Dynamorph reacts to your playing. Some of its fuzz is so intense that it sounds even better if you roll off the volume knob. Those dynamics are reflected in the glowing butterfly-shaped LED.

Sure, the Dynamorph isn’t for everyone, but for those who want a pedal that stands out from the pack, it’s a keeper. Record producers and studio players might consider it a “secret weapon” – think of that fuzzy, farty guitar tone in Norman Greenbaum’s “Spirit in the Sky” or Jeff Beck’s early fusion work. The Dynamorph is cool enough to deliver just that sort of unique, wonderfully weird tone and countless others.