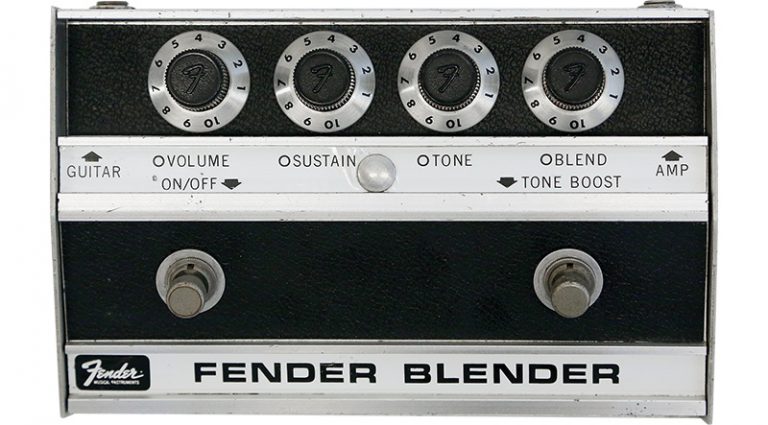 When Robin Trower segued from his wah-driven blues-rock riffing into the slowed, deep-blues groove of the second half of his ’74 anthem “Too Rolling Stoned,” he kicked it over to a progressively more aggressive overdrive sound. And in his final screaming solo, he hits those big bluesy bends that made him famous, powering his Strat via a pedal largely forgotten these days – the Fender Blender.

Fender has always kept its corporate sights focused on guitars, basses, and amps, with only the rare – yet notable – entrées to the effects world. The big F introduced the Fender Blender in 1968 at the peak of the fuzz-pedal wars that started in ’62 with Gibson’s Maestro FZ-1 Fuzz-Tone and ramped up through the ’60s with the numerous incarnations of Tonebenders, the Fuzz Face, Mosrite Fuzzrite, Shin-ei/Univox Superfuzzes, and many more.

Trower utilized the Blender on his breakthrough Bridge Of Sighs LP as well as his 1976 disc, Long Misty Days, and probably more.

Other players adopted the effect too; Fender sort of advertised in ’68 that Jimi used one, though it’s not known if that was anything more than a marketing ploy. George Harrison may have used one on his 1970 solo masterpiece, All Things Must Pass; the thick, bass-heavy fuzz of “What Is Life” sounds like pure Blender mayhem.

By ’77, though, the pedal was history. Or at least sort of. It would be another decade before the world heard a Fender Blender in a significant way.

From the start, the Blender was an interesting and unique blend of fuzz and octave that stood out in the (by that point) crowded array of boxes.

The Blender may have been inspired in part on the late-’60s Shin-ei Superfuzz designed by effects wizard Fumio Mieda; the Japanese pedal did include its schematic handily glued inside the housing. The Blender’s topology was darn similar to that of the Superfuzz, including a Germanium-diode clipping stage, transistor splitter, and a switchable Tone control.

Another part of the Blender’s circuit bore more than a passing resemblance to Roger Mayer’s Octavia. While Mayer’s first ’67 Octavia prototypes used transformers, when he began producing the effects, he switched to a less-expensive – and less-fragile – transistor, similar to what the Blender would use.

In the Blender, the octave stage includes the transistor splitter followed by diode rectifiers. The signal is then recombined to create a full-wave rectification effect. To the player, that meant some of the most intense fuzz available was right beneath their big toe, as was a gorgeous octave-up chorus. And, of course, they could blend the sounds together.

The Blender included four controls; the Volume knob dictated output, Sustain prolonged notes played through the effect by boosting the output as the input signal faded. The Tone knob adjusted the tonal balance from low to high frequencies. And the Blend mixed the output ratio of unprocessed and processed signals, which also modified the octave range. Added to that was a Tone Boost footswitch that enhanced equalization of the Tone knob, in effect offering a high-end kick in the pants.

While the Blender may have borrowed inspiration from others, the result was unique. It simply sounded like nothing else.

Played with a light hand, it offers a warm overdrive akin to a Fender tweed Champ in all its glory. Or, spin that dial northward and you’ll get an extreme, ultra-aggressive fuzz that’ll make most other fuzzboxes seem like shrinking violets. Then, you can blend the octave sound to fill either the subtle, warm drive or the full-throated scream. And the Sustain will keep that scream going on and on, just like in the shower scene from Psycho.

The distortion was also wonderfully bass-heavy, weighing down that low-end response. If you had any worries, this could be balanced by the Tone Boost’s high-end boot in the backside.

All in all, it was an unapologetically extreme effect. The Blender featured gobs of chaotic fuzz, more gain than you could handle, and a bottom-end rumble. In truth, it could be difficult to control. Wonderfully so.

In the late ’70s, the four-knob Blender was replaced by a three-knob version that was undeserving of the original’s name and fame. The pretender had a new layout, different circuit, no octave effect, and lacked the namesake blend function. It died a quick death.

In the ’90s, the ’68-’77 Blender was discovered by a new generation of guitarists, and returned – loud and proud – on the pedalboards of indie guitarists like Billy Corgan of Smashing Pumpkins and Kevin Shields of shoegaze wonders My Bloody Valentine. The pedal played a starring role on these band’s masterpieces, Gish and Loveless, both released in ’91. In 2005, Fender reissued the four-knob Blender.