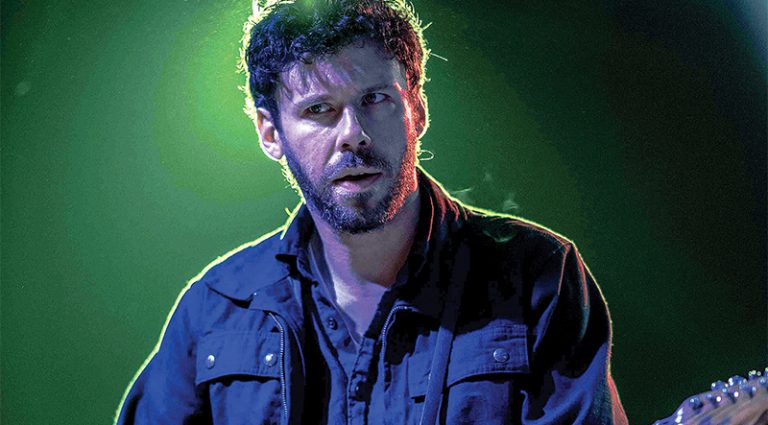 “We started as three side men scheduled to back a singer who was a no-show at this bar in Brooklyn,” said Scott Metzger, recalling the origins of the trio Wolf!.

“After 45 minutes waiting, the club manager said, ‘Just go out and play.’ We knew the song list wouldn’t work without vocals, so we made up a set; the drummer would introduce a groove or I’d suggest a key and a style. The crowd loved it, and the club asked us to be their house band, so we suddenly had a weekly gig.”

The guitarist grew up in New Jersey and started playing guitar in his early teens, using an aunt’s nylon-string. “I started out playing Metallica’s Kill ’Em All on that guitar; I wouldn’t try that now!” he laughed. “After that, I got into Hendrix, then worked my way back.”

There were no bands in his hometown, so after building his chops, he ventured to nearby New Hope, Pennsylvania – the home, he says, of all things Ween.

“I was terrified, but I worked my way into their world and started a band.”

The majority of his guitar work is done on a ’72 Telecaster with a ’68 neck. “About five percent of the time, I play a beautiful Songbird, by Ronin. I’m not usually a fan of boutique stuff, but it’s the exception.”

His amp of choice is a Reverend Hellhound, which he calls “…the ultimate New York City throw-and-go amp. It’s small but loud, and can do a lot of things.”

Following that initial rush that ignited Wolf! – and many more hours playing together – the band went into a studio mostly to record their songs for reference. “Then, a year after we recorded the songs, Kevin Calabro, at Royal Potato Records, asked if we wanted to do an album. I said, ‘Yes… In fact, we already have one!’”

The band, which has never held a rehearsal and bonds mostly over a shared love of sounds, nonetheless has an ultimate purpose.

“We constantly remind ourselves that our goal is to compose the music for a Quentin Tarantino move,” he laughed. “If it ever happens, we’ll probably quit right after.”

While Wolf! keeps him busy, Metzger has plenty of other things going on. He plays in Joe Russo’s Almost Dead, which plays the music of the Grateful Dead and was formed to play a one-off show but proved so popular it has regularly played at several venues. Metzger also spent the last year playing in Trixie Whitley’s band. The daughter of the late Chris Whitley, Metzger describes her as “an incredible talent” as a writer and performer. He’s also found time to play in Anders Osborne’s band, when his schedule has an opening. “He’s so good, and I’ve enjoyed playing with him quite a bit. Standing onstage with that guy is like standing next to a jet taking off.

While his schedule is full, Wolf! takes a less-ambitious approach. “We’re fun-based, and people enjoy that.”