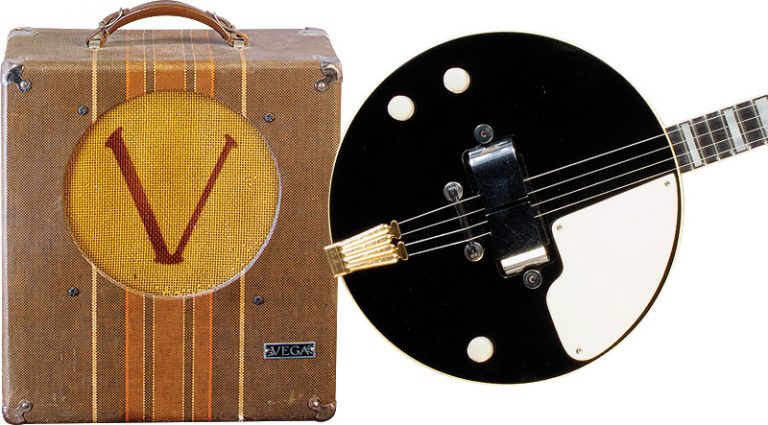 Billed as “the latest orchestral sensation… unparalleled for versatility,” Vega’s electric banjos – developed to compete with one being made by Gibson – were of little consequence in the market.

Documentation is sparse, but it appears Vega started building them in late 1938 and continued until ’42, before surrendering to the production privations of World War II. Available with a tenor or plectrum neck, company catalogs offered them as outfits with an amplifier and hard case.

Both offered a choice of amplifier; Vega’s were 10- or 18-watt versions, Gibson’s 15 watts or 18 watts, and both asked customers to specify AC or DC operation. Gibson went a step further by offering amps that would run on 220-240 volts and 25 to 50 cycles.

This Vega De Luxe was built circa 1939 at the company’s factory in Boston. Its plectrum-length maple neck has an ebony fingerboard with 22 frets and 10 rectangular mother-of-pearl position markers. Its scale length is rather long at 27.25″, and the peghead has a Vegaphone-style pyralin overlay that is engraved and painted. The tuners are Grover’s DeLuxe units with mother-of-pearl buttons, and the neck attaches to the body with a “stub” dowel stick using a regular Vega wedge clamp.

The neck and body are finished in black lacquer, while the rim of the electric banjo is multiple plies of maple with an outside diameter of 11.75″ and a thickness of .625″. The rim is 2.5″ tall and is single-bound white on the top and bottom edges. The top and the back of the body are constructed of poplar laminate. There is a single-ply white pickguard on the front of the body. The bridge is height adjustable but uncompensated and the tailpiece is a Grover “De Luxe” clamshell with gold-plating and engraving.

The electronics are accessed through a removable back panel with six nickel-plated flathead wood screws. There is a volume and tone control as well as a ¼" phono output jack on the top side of the body in a rather inconvenient spot. The word “DeLuxe” is penciled in script on the interior of the body and the numeral “2” is die-stamped on the inside of the back panel, inside of the rim and inside of the top.

The pickup is a nickel-plated Vega horseshoe-type, invented in 1930 by National founder George Beauchamp and brought to market the next year in a lap-steel guitar. In 1935, Vega debuted a similar pickup, with individual pole pieces under the strings and a wound coil, like modern units. Instead of a small base magnet, the Beauchamp pickup (and the Vega models) utilized two large horseshoe-shaped permanent magnets that surrounded the strings, making it a large, heavy device. Gibson’s smaller pickup, also introduced in ’35, had a single bar-type pole piece and two magnets in the base superseded the Vega design and led the way for Fender and others.

The Vega is difficult to hold steady in a playing position – the mass of the tuners verses its overall lightness results in a neck which constantly wants to fall over and the roundness of the body exacerbates the situation.

Vega also sold “airplane cloth” covered hardshell cases for its electric banjos. This example is housed in its original case, which was priced at $18 and looks a Geib, though it’s not marked.

Among the many band publicity photos in the 1939 Vega catalog is one of an electric banjo which resembles the specific features of this one; Bud Hulslander’s Gang was a group from San Francisco consisting of the unlikely assemblage of seven players using electric banjos and two using doubleneck lap-steels. Each is posed in front of a Vega 131 amp identical to the unit which remains with the banjo today. The majority of the banjoists appear to be holding examples of the regular Vega electric banjos with dot-inlayed fingerboards and dark-wood veneered pegheads. The exceptions are Mr. Hulslander himself (who is holding what is clearly an upgraded model) and an unidentified musician on the far right with a plectrum-neck instrument. 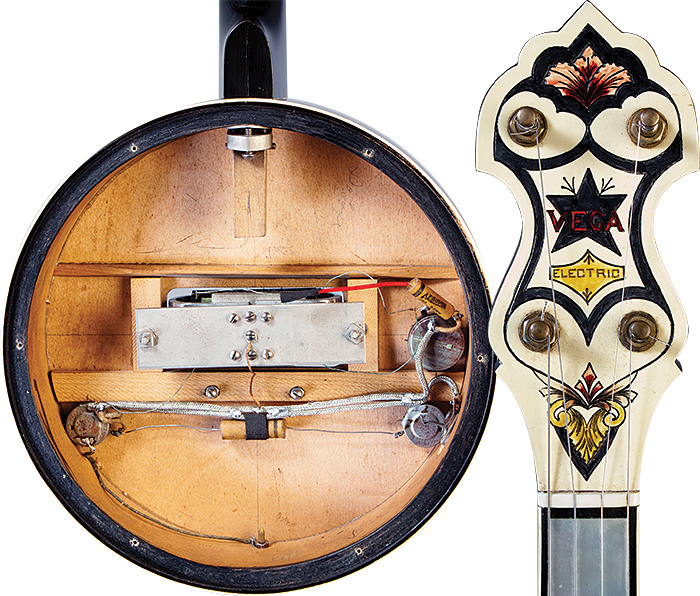 Interestingly, the amplifier with this instrument is inscribed with the name “Garcia” in penciled script handwriting on the rear control plate, clearly a necessity for any musician who is performing in a group of nine men with identical amps. The amplifier is a Vega Model 131 with an output of 18 watts and was priced at $77.

When the 1939 photo was made, a newly divorced Hulslander (1904-’56) was a recent transplant to San Francisco from Chicago. He was working as a salesman at Coast Wholesale Music, which may explain the unlikely instrumentation of the group in the catalog photo. The banjo featured here was discovered in Portland, Oregon, so it could be the same one.

Any Vega electric banjo from the late ’30s or early ’40s is an uncommon instrument. While production numbers are unknown, given they shared the same market, Gibson logs offer an idea; in the same period, Gibson built 68 electric banjos, two-thirds with tenor necks. Plectrum banjos did not enjoy the popularity of tenors, so a Vega electric plectrum banjo with custom features must be rare. 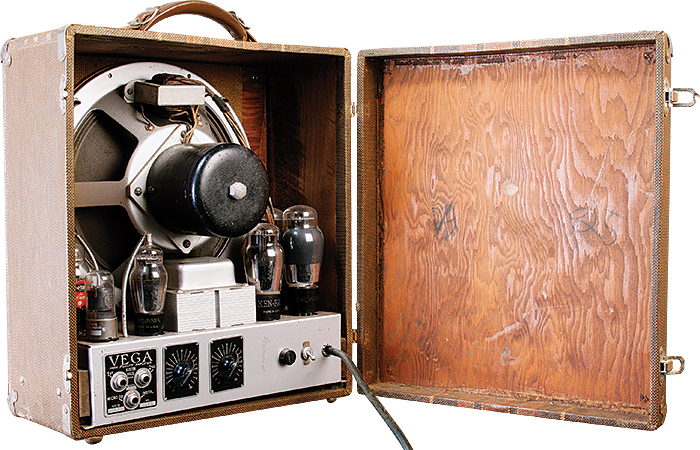