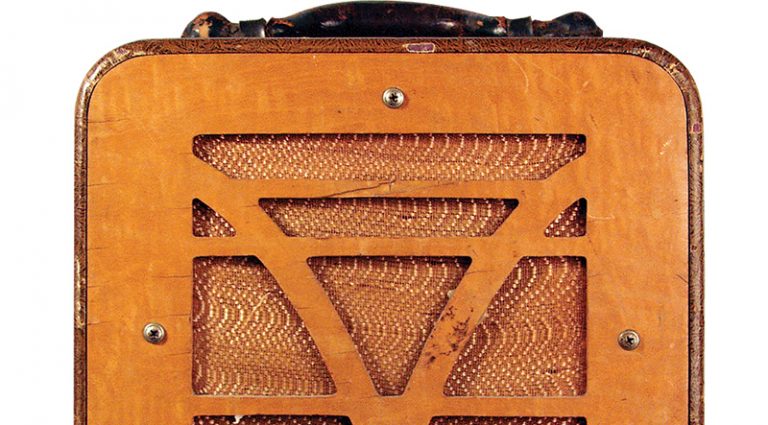 Viewed from our contemporary perspective, it’s difficult to fully appreciate how different the music scene in general – and the guitar scene in particular – was back in the early part of the last century. When the electric guitar hit the ground as a viable entity in the mid 1930s, everything was up for grabs… and no one was certain it wasn’t just a flash in the pan.

Just two, maybe two and a half decades later, the market had settled down considerably, and the leaders in guitar and amplifier stakes alike were found in the two biggest names that remain with us today – Gibson and Fender. Had you been canvassing the guitar scene in 1936, however, you might have put even money on Vega to remain a contender 20 years down the road.

Going on brand strength, history, and general popularity, Vega was in no way looking like a company that would be noted just a generation later as an “also ran” of the early guitar boom. Founded in Boston in 1881 by Swedish-born Julius and Carl Nelson and a group of partners, Vega made guitars and mandolins from the start, but became a particularly big name in banjos by the early part of the next century. In the early 1900s, the company also expanded to brass instruments after purchasing Boston’s Standard Band Instrument Company. Then, when amplification looked to be the way forward for the guitarist who needed to be heard above all that din, Vega jumped in with both feet. The Gibson ES-150 of 1936 is often cited as the first production-model electric guitar released by a major manufacturer, but Vega’s own electric Spanish guitar, the Electrovox, hit the market that same year – with a humbucking pickup, no less – and the company produced amplifiers to accompany the range. And if that’s not enough to give Vega street cred, it’s worth mentioning the company had a retro-fit pickup (referred to in catalogs as a “head”) available for banjo as early as 1929, with an accompanying “amplifying unit,” though there’s little or no information on it.

The Model 120 was manufactured in ’39, and is typical of the Vega line before the war. You’d be hard-pressed to find a cooler-looking art deco motif than on this little amp, and it’s rendered with such stylish simplicity, with a subtle-yet-distinctive “V” carved into the wooden grille that fronts the golden moire speaker cloth. And this was not just any guitar amplifier, but a “High Fidelity Amplifier,” as the plate on the rear of the chassis (also equipped with three inputs) proudly proclaims. A look at the hand-wired circuit inside is likely to inspire thoughts rather far from “high fidelity,” though. This is real deal pre-war/point-to-point wiring – a far cry from the way several boutique makers are doing it today, and yet… you have to imagine there’s a little sonic veracity in there, too. It’s often surprising the way these simple, cobbled-looking old circuits can wring every ounce of tone from a tube complement, and the amp’s owner, George Aslaender, Brooklyn, says you’d better believe that applies here.

“It really is a great-sounding amp!” he reports. “I put a [Gibson ES-] 175 with humbuckers through it… great sound. Output is decent enough to play with a small combo or solo. I also tried it with a Stratocaster; lower gain, but again, a real nice tone. It does not really overload, just gets louder and warmer. Would be a great amp for Fender-style guitars in the studio. It seems to make everything sound good – reminds me of what people say about the [Universal Audio] 1176 compressor and how it ‘puts a hug around the sound.’” 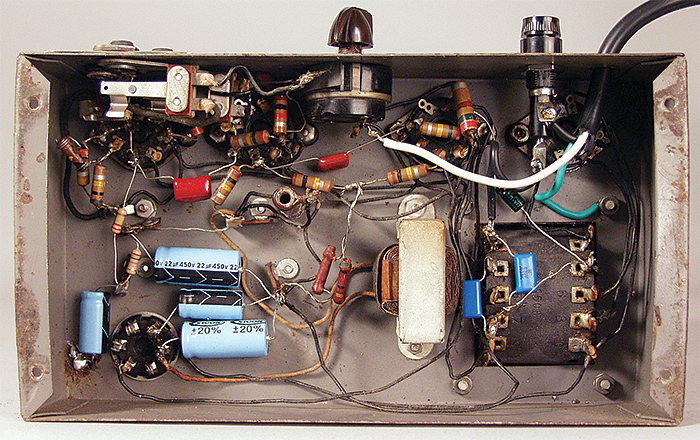 As you can see from the internal shot, this Model 120 has newer filter capacitors, and several replacement signal caps too – routine maintenance that’s simply essential to keeping an old amp running – but the majority of the components are original (a grounded three-prong plug was installed for safety). That whopping potentiometer, backing the only knob on the entire amp, is the Volume control, which also includes the on/off switch coupled to its back. The tubes two 6F5s in the preamp, a single-ended 6L6 for output, and a 5Y3GT rectifier, for five or six watts at best. It all goes into an 8″ Rola field-coil speaker that has survived in surprisingly good condition… Fingers crossed it stays that way. The entire combo logs a diminutive 16″ x 12.75″ x 7.75″. Cute, right?

Vega kept at it through the war years and a couple decades after, but the brand has always remained more in evidence for its guitars (some very cool indeed) than for its amplifiers, and of course banjos remained central to the catalog, too. In 1970, C.F. Martin purchased Vega mainly as a way of adding banjos to its own lineup. From there, the name was also disseminated to a line of imported guitars before the brand eventually lapsed. In 1989, Deering Banjo purchased the name and applied it to a range that is still manufactured today. Alas, there are no amplifiers in the lineup. Oldsters like this one do occasionally surface, but they’re a rare sightings these days.