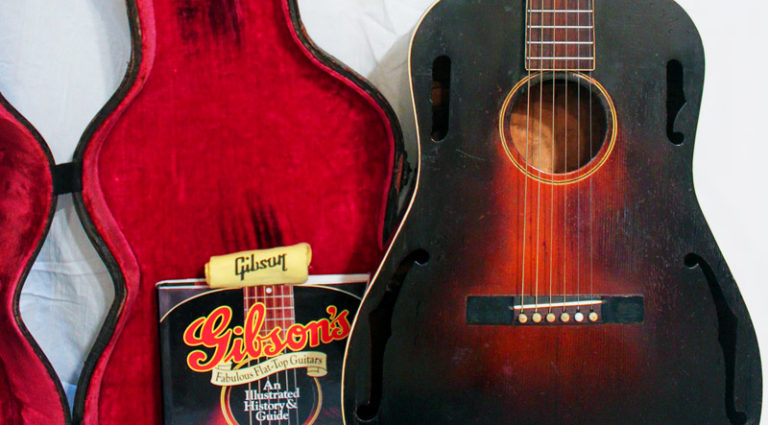 Warren Garstecki is a collector who keys on vintage Gibsons with interesting histories, like the HG-22.

Introduced in 1929, the “Hawaiian Gibson” was offered in three models, with the HG-20 at the bottom and jumbo-sized HG-24 at the top. All had a round 14-fret neck along with nut and bridge set for traditional “Spanish” play. But that was not their most-curious element.

Because the guitar would compete with metal-bodied resonators, Gibson created a “double-rim” design for the HG, with a mahogany inner wall that, according to Gibson’s Fabulous Flat-Top Guitars, An Illustrated History and Guide by Eldon Whitford, David Vinopal, and VG columnist Dan Erlewine, was glued to the top about 2″ from the sides and descended to within about 1″ from the back; collectors refer to it as a “baffle,” and its purpose was to support the top under higher-tension tunings and break up low-end frequencies deemed undesirable by slide-steel players using large-bodied guitars. Through the years, many players removed it, likely because they played it as a regular Spanish-style guitar; as such, the baffle deadened overall tone.

The HG-22’s lower bout measures 141/2″, and body depth is 41/4″ at the lower bout, 31/2″ at the upper. Scale is 243/4″. Gibson’s 1932 catalog – the only one that mentioned the HG-22 – included flowery adjectives like the “northern air-seasoned maple” used for its back, sides, and the baffle. The spruce top was finished in brown sunburst, while the top and back were single-bound in white ivoroid. Some were given a tortoiseshell celluloid pickguard. The mahogany neck was supported with a truss, and its bound rosewood fretboard had basic dot inlays. Retail price was $80 – high at the time thanks to the baffle and labor intensiveness of the f-shaped sound holes between the sides and baffle on all four bouts.

Garstecki’s HG hasn’t escaped the effects of time; its tuners, truss cover, and nut/saddle have all been changed. Its case is a post-war Lifton with a red-and-black badge.

“It also has several repaired top cracks, a side crack, and a small center-seam separation that were repaired professionally. Two of its f holes have minor damage along their edges, and the third-fret dot has gone away. All the binding is there, but has shrunk a little in spots.”

“With the baffle, the sound is comparable to a metal-bodied resonator, but with overtones of wood,” he added. “It’s among the best-sounding all-wood slide guitars I’ve ever heard.”

Special thanks to Walter Carter.