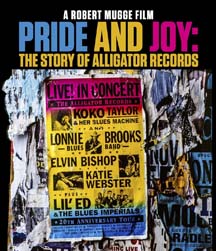 In 1991, Robert Mugge made the documentary Deep Blues, with the help of journalist Robert Palmer, who wrote the book of the same name, and David Stewart of the Eurythmics. After its release, Mugge got a call from Bruce Iglauer, president of Alligator Records, and the following year, Mugge’s Pride and Joy: The Story of Alligator Records was released. This year marks the blues label’s 45th anniversary, with an expanded version of the film on DVD and Blu-ray, featuring a “making of” short and audio of additional songs.

Pride and Joy is more a concert film than a documentary, centered around Alligator’s 20th anniversary tour. The live shoot was done at a club in Philadelphia because it was closer to Mugge’s home. The lineup consisted of Li’l Ed and the Blues Imperials, Koko Taylor, Elvin Bishop, Lonnie Brooks and his son, Ronnie Baker Brooks, and Katie Webster, and the performances are excellent. From a guitar standpoint, Bishop shines, sparks fly in a father-son Brooks jam, and Li’l Ed Williams’ slide boogie is reminiscent of his uncle, J.B. Hutto.

Alligator is still going strong and is arguably the most successful blues label active today. As Iglauer explains in the film, he was working for Delmark Records, but when he couldn’t convince them to record Hound Dog Taylor, he decided to do it himself. The first six Alligator albums, released roughly one per year beginning in ’71 – featuring Koko Taylor, Big Walter Horton with Cary Bell, Fenton Robinson, Son Seals, and two by Hound Dog – set a mighty high bar.

Eventually, Alligator was releasing 10 to 12 albums per year by artists such as Albert Collins, Johnny Winter, Buddy Guy, Roy Buchanan, Gatemouth Brown, Luther Allison, Little Charlie and the Nightcats, and many others. To date, the label has released more than 250 albums, counting a later-discontinued reggae line. “I get to make the musical decisions,” says Iglauer in the film. “I get to make the business decisions, and I get to live with whatever mistakes I make.” (One decision that some would say is comparable to Dick Rowe of England’s Decca Records, who turned down the Beatles, was passing on Stevie Ray Vaughan and Double Trouble.)

Mugge visited Chicago, where Alligator is headquartered, but little local color is included. Worse, obvious elements that would have made it more of a documentary are missing. Iglauer talks about the late Hound Dog Taylor, but there’s no footage of him (though some exists) and, more unthinkable, none of his music is even played – nor Fenton Robinson’s, nor Son Seals’. These flagship artists are integral to, yet absent from, Alligator’s story.