Kudos to Red House Records for this three-CD set of rare and unreleased recordings by blues singer/guitarist Dave Ray. It probably won’t fly off shelves, but more people need to be exposed to the music of Ray, who has been largely overlooked in the various treatises on blues and the Folk Boom.

“Snaker,” as he was nicknamed, was barely out of high school when he began playing Leadbelly-inspired blues in bars and coffee houses in Minneapolis. It was usually in the company of blues harpist Tony “Little Sun” Glover and/or fellow 12-string guitarist “Spider” John Koerner – both a few years older than Ray, who was notably not a mere copyist. The “and/or” was somewhat of a running joke when the trio cut its first LP, Blues, Rags & Hollers, because it was rare for all three to perform together, live or on any given song on the album – which was picked up by Elektra Records. 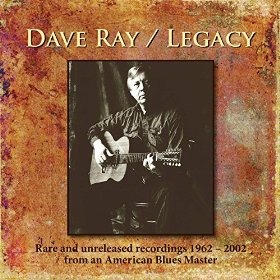 Whites playing pure country blues were a rarity then, with John Hammond and Geoff Muldaur numbering among the few to record. They received their biggest exposure at folk festivals such as Newport and Philadelphia, acting as sort of a bridge between the white folk acts and older “rediscovered” blues musicians.

Legacy is programmed chronologically, covering 40 years, beginning with ’62 basement tapes of Ray solo. Following are live cuts of various configurations, mostly eschewing KR&G proper, although one disc is virtually dedicated to board tapes of the Ray & Glover years. Its 32-page booklet includes insightful cut-by-cut commentary by Glover, the collection’s producer.

Ray flirted with electric bands (although he later called Bamboo “boring and forgettable”); he engineered Bonnie Raitt’s self-titled debut album; and there were numerous KR&G reunions. In 2002, he was diagnosed with lung cancer and died, 59 years old.

This is highly recommended, as are the updated DVD of Blues, Rags & Hollers – The Koerner, Ray & Glover Story and reissues of their collective and solo Elektra recordings from the early and mid ’60s.