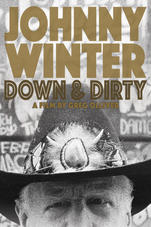 In an intimate scene in this DVD’s bonus features, after a short interview and solo slide performance at home (“Murdering Blues” on his ’64 Gibson Firebird V), Winter says, “I love playing guitar. It’s the only thing I’ve ever been really great at.” The key word is “great,” and that’s a major understatement.

Before his death in 2014, Johnny Winter was one of the greatest blues guitarists (and a topnotch vocalist), and it’d be hard to name a slide player who combined dazzling chops with authenticity with such ease. In the recording studio, he sits down with his steel-bodied National Duolian and knocks off Son House’s “Death Letter” in one take, maintaining great intonation without even looking at his hands! Granted, he was near-blind until having Lasik surgery a few months before his death, but he could see his guitar; he just didn’t need to. As he said in his July ’14 VG cover story, “I know exactly where I’m going.”

Director Greg Olliver didn’t just make a concert film; his documentary follows Winter on stage and on the bus, at home, and even in a session with the guitarist’s therapist. The result is a warts-and-all, insider look at a rock and blues legend who could be somewhat of a recluse.

His heroin habit in the early ’70s, being overmedicated by a crooked manager, the ramifications of his admitted OCD – nothing’s off limits. One touching moment comes when, after painstakingly shaving down Johnny’s methadone pills, guitarist/manager Paul Nelson informs the bluesman that, unbeknownst to him, he’s been off the drug for months.

Ironically, in the best health he’d enjoyed in decades, the 70-year-old died of natural causes while on tour, just a couple of years after this was filmed.

Inexplicably, Johnny Winter has still not been inducted into the Rock & Roll Hall of Fame. But being inducted into the Blues Hall of Fame in ’88, its first white member, was no doubt infinitely more meaningful to him. After his plaque is finally presented to him at a Memphis gig decades later, he’s like a kid with a Christmas toy on the bus, looking at it and saying, “That’s so cool. I had tears in my eyes.”

Thank goodness Olliver chose Winter as a documentary subject, and thanks to Johnny for granting such unprecedented access.