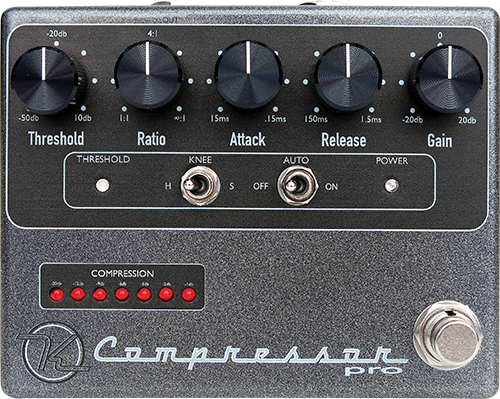 Studio-quality dynamic control at your feet is a luxury that guitarists haven’t seen before. With the Compressor Pro, Keeley Engineering has managed the impressive feat (sorry) of stuffing a studio compressor’s performance and feature set into a stompbox. Thoughtful design choices make this ideal for guitarists and bassists, though it’s versatile enough to accept any instrument and can even double as a desktop compressor in a home studio.

The speed, transparency, and range of this box are on point for common comp uses such as slappy chicken-pickin’ and extended sustain, while other qualities – natural attacks, uniform EQ, smooth decays – open up new opportunities to refine sounds. Best of all, it’s easy to unlock this pedal’s potential thanks to a complement of user-friendly features.

Compression can be your friend in any number of scenarios, but even guitarists who understand the need sometimes struggle to set their parameters just right. That’s where Keeley’s Auto toggle is like sunshine on a cloudy day. The Auto function bypasses the manual Attack and Release controls and automates their timing in direct response to your playing. We found Auto to be smarter than we were, frankly, reliably nailing a sweet spot once the general characteristics of the effect (threshold, ratio, make-up gain) were set. For a unit of this complexity to have a set-and-forget option is really kinda special.

A second standout feature is the hard/soft Knee toggle, which enables either a pronounced clamp on the signal (think slap bass, fat slide parts, a plucky Tele) or a smooth, subtle curve that can warm up a lap steel swell or polish a finger-style part while maintaining the integrity of your touch.

Onboard indicators are likewise uncommon in compressor pedals, and the Compressor Pro’s visual references are especially helpful in a live setting where it’s difficult to hear. A two-color LED turns from green to red when the threshold is reached (engaging the effect), and a seven-segment meter (-1dB to -20dB) indicates how much attenuation is being applied, just like on software and rack-mounted compressors.

The Compressor Pro offers a mix of sophistication and simplicity that audio engineers will appreciate and guitarists can put to practical use straight away. Robert Keeley built the Compressor Pro on the same high-end chip that earned praise for his GC-2 and Bassist compressors. It’s clear with this new set of features that he genuinely understands what players need. Keeley also gets that we want to optimize every parameter affecting tone – even when we don’t have the patience to twiddle and tweak.