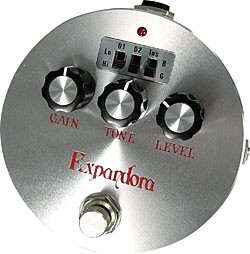 Bixonic introduced the Expandora distortion/fuzz pedal in 1995, and it quickly became popular among guitarists the likes of Billy Gibbons, Joe Satriani, Megadeth, and Bootsy Collins. The original Expandora was loved, but had its drawbacks, such as having its DIP switches inside. It was also a little thin-sounding. In ’01 we saw the Expandora II, with more tone control and better low-end response. And at this January’s NAMM show, Bixonic introduced the Expandora 2000R, which combines the best of both previous versions and offers a few subtle improvements, like DIP switches on the outside making them of course more accessible, sturdier bypass switch, and a DIP switch to toggle between the old version and newer version with more bass.

The Expandora’s well-built metal casing resembles a tuna can, giving it a cool, unique look. All parts are heavy-duty, adding to its potential durability. A Phillips screw removes the plate for easy battery access. A look inside reveals its extremely clean electronics work.

The unit can be powered by a battery or recommended 9-volt power supply. A red LED works in conjunction with the bypass switch.

The Expandora’s Input Gain allows the user to adjust distortion gain, while the Tone knob controls high-frequency cut. The third control, Output Level, allows you to balance volume between the distorted and bypassed signals.

The first two DIP switches toggle between two levels of distortion. The third switch toggles between the old pedal sound and the version with more low-end. The positions are marked “B” (bass) and “G” (guitar) and the Expandora can be used with bass guitars.

To sample the Expandora, we used two of our favorite machines – a ’70s Ibanez Artist with Wolftone Greywolf pickups, and a stock ’72 Fender Strat. Our amp was an all-tube Peavey Butcher head with 2×12″ cab. We plugged in the Artist, set the amp to clean, set the Expandora’s gain switches to low, and set input gain at 10 o’clock. Tone was at 9 o’clock.

With the Instrument switch set to B, we got a very transparent, slightly overdriven blues sound that was really natural. We experienced no loss of low-end whatsoever or note separation. We increased the gain and got more distortion, but it remained clear and natural; we were surprised by the gain the Expandora offered even with the DIP set in the low position.

Switching the Instrument DIP to G, the tone thinned out noticeably, to the point of becoming nasaly (like older distortion units). Switching back to B, and D1 to high, we got more really fat gain.

Then we entered what Expandora users call the “forbidden zone,” with D2 in the high position. This made for a fat, over-the-edge fuzz that just about buried us! Switching to G, the fuzz thinned out, but was still plenty heavy. This pedal is capable of extremely fat or thin fuzz. We also noticed that when using D1 and D2 by themselves, D2 adds more gain. Tons of gain structures can be had just by dialing and switching.

In the higher-gain settings (excluding the “forbidden” mode), the signal cleaned up very nicely as we rolled off our guitar’s volume control. All pickup positions sounded great, leaving no great distortion rock unturned.

Next, we plugged in the Strat and got very much the same tonal results, except it fattened the sound of the Strat slightly at lower gain settings. We noticed, however, that at higher gain settings, the Strat seemed to fuzz out a little more than the Artist. At higher levels, the Expandora simply likes humbuckers better.

The Bixonic Expandora 2000R does a fantastic job of giving you any distortion tone, from fat, slightly overdriven blues to tons of natural, great-sounding distortion, to over-the-edge fuzz. A player could hook many of these together with various preset gain structures and probably never need any other distortion or fuzz pedal. Money well-spent!