Home Music Robert Trujillo and Others 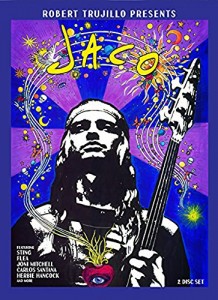 A brave and powerful film, Jaco documents the life of fusion bass virtuoso Jaco Pastorius. Yet by its end, you will realize that Pastorius transcended such simple terms as “jazz-rock” and “electric bass.”

The two-hour DVD (and bonus disc) covers his musical youth in south Florida, where he absorbed sounds from Cuban music to jazz, R&B and funk, rock and roll, and in fact, everything he heard. There’s great footage of young Pastorius, from his earliest years on drums through his landmark Weather Report stint and critical sideman work with Pat Metheny and Joni Mitchell.

While Jaco stood in the spotlight in the late ’70s, it all began to unravel in the ’80s, even after his genre-busting solo album, Word of Mouth. Later, drugs, alcohol, and mental-health issues took their toll, culminating in the bassist’s cold and brutal premature death in 1987.

Along this journey there are insightful interviews with the musicians he played with and those that admired him (Carlos Santana, Al Di Meola, Bootsy Collins, Sting, and more). Particularly poignant memories come from Weather Report drummer Peter Erskine and the late Joe Zawinul, the band’s keyboardist and co-leader. An important figure in the bassist’s life, Zawinul was Pastorius’ musical father, yet the two had a strangely fractious and competitive relationship, as Jaco makes eminently clear.

You also get a feel for Jaco’s own sizable ego, as he copped the Weather Report gig by claiming he was “the greatest bass player in the world” – which, of course, was entirely correct.

While the film is a celebration of his four-string prowess, there’s a pervasive sense of tragedy here. Pastorius was the quintessential slow-motion trainwreck, something keenly felt by former bandmates who still harbor guilt over both his downfall and their own lack of intervention.

On the more positive side, bassists will enjoy checking out Jaco’s supreme playing style and live rig up close. His righthand work was freakishly powerful, while his fretting hand was poetry in motion. As you will see, the bassist was not bound by traditional rhythm-section roles: Jaco played brilliant solos, fluid jazz chords, and dazzling harmonics all over the fretboard. Viewers can also ogle his battered, fretless ’62 Fender Jazz bass, Acoustic 360 heads, Hartke cabinets, and rackmount MXR Digital Delay, which he used for then-radical looping effects.

The separate 16-cut soundtrack album features a range of Pastorius tracks plus tributes from Mass Mental (featuring film producer and Metallica bassist Robert Trujillo) and others.

Overall, Jaco is a bittersweet saga telling the story of a brilliant, but at times hapless virtuoso who lost the war with his inner demons. Still, every electric bassist over the past 40 years owes a debt to Pastorius, something the film proves elegantly. As the closing credits roll, you will simply say, “Thanks, Jaco.”