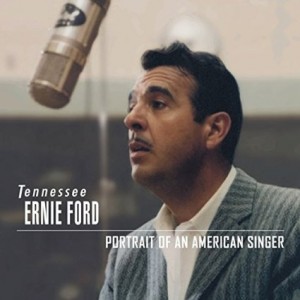 “Sixteen Tons,” Tennessee Ernie Ford’s immortal 1955 interpretation of Merle Travis’ impressionistic 1946 coal-mining ode, became a country and pop standard that not only cemented Ford’s place in American music, but landed him a prime-time NBC TV series for five seasons. Despite several best-selling sacred albums in the ’50s, he never found another “Sixteen Tons,” one of the 154 songs on this five-disc box-set of Ford’s selected 1949-’60 output for Capitol Records. The hymn albums are excluded.

What sets this compilation apart is that it offers the complete, still-extraordinary Tennessee Ernie “boogie” recordings of 1949-’53. During these years, he recorded with Capitol’s scintillating L.A. country session band, centered around the explosive team of Speedy West, who became country’s first pedal steel guitarist in 1948, and Jimmy Bryant, known for dizzying guitar pyrotechnics. The steady acoustic rhythm guitar came from Eddie Kirk or Billy Strange. They backed him on his first two gospel tunes, recorded in 1950.

Two other 1950 singles became country and pop hits: the bluesy “I’ll Never Be Free” with pop singer Kay Starr and his rollicking “Shot Gun Boogie.” Vocally, Ford fed off the band, and vice versa, apparent on the explosive “Tailor Made Woman” (with Merle Travis on electric guitar) and “Blackberry Boogie.”

Among the lesser known standouts: “My Hobby,” with a nicely articulated Bryant break, and West’s blazing solo on a cover of Willie Mabon’s R&B hit “I Don’t Know.” Their work with Ernie made West and Bryant first-call Hollywood session players and led to their own incandescent series of instrumentals for Capitol.

Today, Ford is remembered mainly for “Sixteen Tons,” his colorful “pea-picker” nickname, and the hymn albums. But it’s the Tennessee Ernie heard on the first three discs, backed by these exceptional players, who still sounds the most vibrant, joyous, and alive.