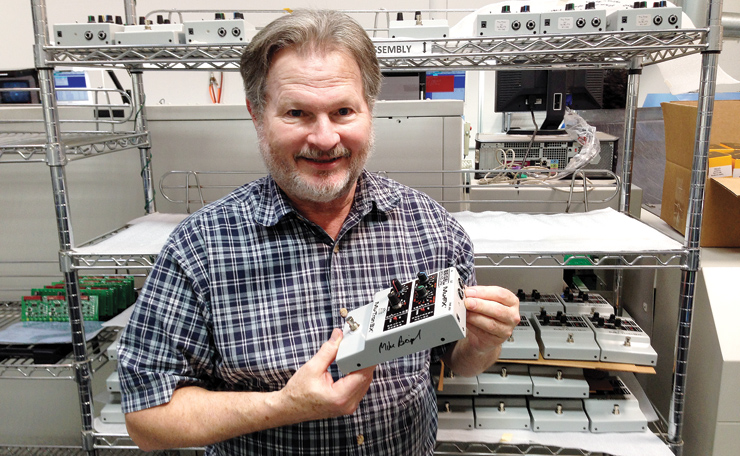 Mike Beigel is no guitarist. But that never held him back in crafting one of the most legendary of all guitar effects pedals, the famed Musitronics Mu-Tron III envelope filter.

When players think “funk,” they recall Beigel’s masterpiece stompbox. Bootsy Collins plugged in his Space Bass to craft his Parliament-Funkadelic sound. Jerry Garcia, Frank Zappa, and Larry Coryell all swore by the Mu-Tron. Even Stevie Wonder ran his Clavinet through a Mu-Tron III on his 1973 hit “Higher Ground.”

For Beigel, it was all a bit of a surprise.

“I didn’t really get what was going on in the music scene then,” he says with a laugh. But that didn’t hamper him.

After launching the Mu-Tron III (in 1972) and other wonder pedals, Musitronics Corporation was sold to ARP synthesizers in 1979, then folded. Beigel later designed the Q-Tron and Bi-Filter for Electro-Harmonix. Another maker launched the HAZ Mu-Tron III+. But to Beigel’s ears, none had the same magic.

Now he’s back. Under the banner of his newly formed Mu-FX company, he’s crafted a modernized version of the Mu-Tron III – the Tru-Tron 3X.

“The electronics use the original Mu-Tron circuitry mojo,” explains the proud father. “I only released it after extensive comparisons with two Mu-Tron III units from my own collection.”

In pioneering an envelope control in the early ’70s, Beigel took a cue from the wah pedal. The Mu-Tron provided the clipped-note vibe of a Vox Clyde McCoy or Cry Baby, without the need for the guitarist’s foot rocking the pedal. An envelope filter screens certain frequencies and lets others resonate within a pre-set “envelope.” Since the circuits respond to the guitar’s signal quicker than a musician can work a treadle, it creates unique, immediate effects.

Beigel’s Tru-Tron offers more control over its sound (watch for a review in the May issue), and he is sure to mention a new twist. “Inside is a trim pot to adjust envelope response time a bit faster or slower to match your playing style,” he said.

The Tru-Tron also gives much more gain than the original. “The high-gain end – the dial is marked to 11 and red-lined at 9 – can give a very high signal gain and drive itself into almost constant overload if you play aggressively,” Beigel says. “This is not the kind of overload distortion you usually want to hear…” But, he leaves that statement open to possibilities.

In addition, by switching to the Mu position, you can run the Tru-Tron just like a vintage Mu-Tron III – a true step back in time and sound.

“You can operate it exactly like the original, if you wish,” Beigel explained. “But we have also added features and extra range capability that allows you to build on the flexibility and playability of the original and get more intense effects, and also some new effect modes and high-gain distorted filter modes, while retaining completely variable envelope control to articulate this new kind of distortion sound.”

That Space Bass “funk-in-a-box” vibe is back.