Pete Townshend sent many a guitar and amp to an early grave. But there’s no known evidence of him doing the same with effects pedals. Never mind that spearing a Rickenbacker through the heart of a Hiwatt provided much more Shakespearean drama than stomping on a lowly stompbox. Perhaps, though, he simply didn’t need to assassinate his effects; maybe they did their duty in providing the angry, aggressive sound he sought.

In the early ’80s, Townshend told a reporter that a fuzzbox was always part of his signal chain, “…just to make a loud noise at the end when I started smashing things up.”

Townshend’s fuzz of choice was a Univox Super-Fuzz, which he utilized to make those loud noises for a full decade, from 1968’s Rolling Stones Rock and Roll Circus through a ’78 session at Shepperton Studios. If you wonder what a Super-Fuzz sounds like in Townshend’s worthy hands, spin The Who’s Live At Leeds; a chainsaw at full throttle begins to approximate that distortion. It’s no wonder he liked the pedal.

Univox’s battery-powered Super-Fuzz and its AC-juiced Uni-Fuzz trace their existence to an early “super effect” – the Japanese-made Honey Psychedelic Machine.

The Honey company was formed in ’67 by ex-Teisco workers after that firm was acquired by Kawai. Two years later, Honey went bankrupt in March ’69 and was reborn as Shin-ei. This later corporation would become famous as the OEM maker of many of the most far out guitar effects ever – including numerous effects made for other brands or marketed under names including Companion, Crown, Apollo, Jax, Shaftesbury, and more.

Shin-ei’s master mad scientist was designer Fumio Mieda. Presumably, he looked at the Honey Psychedelic Machine and wondered if the company was giving away too much in one package. The effect was the size and weight of a full amp head and contained both fuzz and chorus/vibrato circuits – all controlled by a Mood Adjuster knob, presumably part of the psychedelia. Mieda extracted the fuzz circuit, packaged it in its own small stompbox, and in 1967 launched the Shin-ei Companion FY-2 fuzzbox.

Shin-ei was not only a brilliant company when it came to creating guitar gear, it was also masterful at selling its wares – often numerous times over. So, at the same time, the American company Univox unveiled its Super-Fuzz, followed by the Uni-Fuzz. Both were sourced from Shin-ei.

Univox boasted a similarly complex family tree. In the early ’60s, the Amplifier Corporation of America, of Westbury, New York, bought transformer maker Unicord Corporation, then soon launched the Univox amp line, followed by guitars and effects, badge-engineered by Shin-ei. By ’67, the whole show was swallowed up by Gulf+Western, then in the mid ’80s by Korg.

The Super-Fuzz followed suit. The first were painted a dull gray with a blue Univox sticker on top. Circa 1970, they switched to a gray or black die-cast metal box with a rubber-covered pedal embossed with the name “Super-Fuzz.” A few years later, the boxes became orange with a green or blue pedal; they also included a trim pot inside for adjusting balance.

The Uni-Fuzz was housed in a fancier box – well, at least it had more folds to the metal housing. As Univox promised, it was the first AC-powered fuzz, which “eliminates fading problems usually attributed to battery operated units.”

The effects were not bare-bones, however; the circuitry created a unique octave fuzz. All models relied on two germanium diodes to square-clip the signal’s sound wave, but a full-wave rectification then created an upper and lower octave. At the same time, this compressed the signal.

Each of the effects had an on/off button footswitch on top, plus two control knobs – Balance (volume) and Expander (fuzz). With the FY-2 and Super-Fuzz, these knobs were recessed – make that, hidden – on the side. For the Uni-Fuzz, the controls were re-arranged to be front and center for dramatically better access.

The effects also had a two-way Tone slide switch, which engaged a controlling filter to scoop mids, creating an intensely flavorful, full-fat fuzz.

The combination of features set the octave fuzzes apart from other basic distortion and fuzz pedals on the market. As Univox proclaimed in its catalog, “The ultimate fuzz, the Univox Super-Fuzzz! Fantastic fuzzz variations – brilliant to mellow – short to hanging – plain fuzz to Super-Fuzzz! Unequaled sustain. Produces the completest range of harmonic tones.” 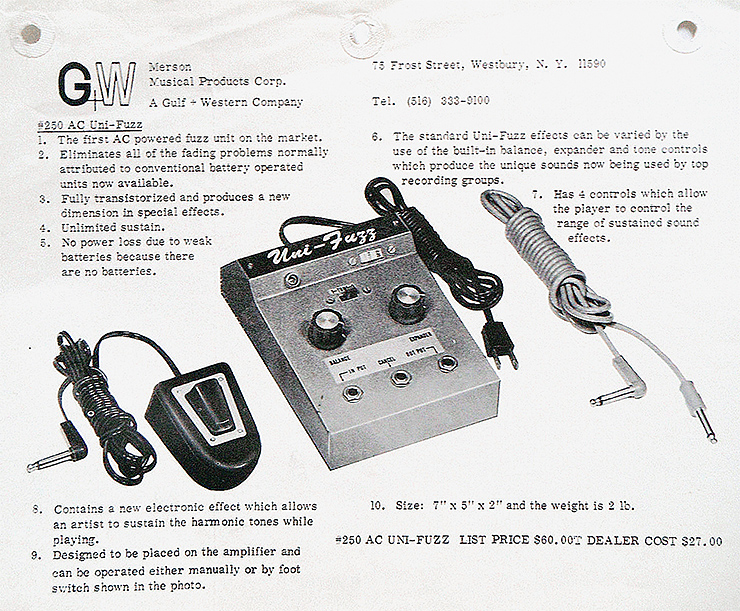 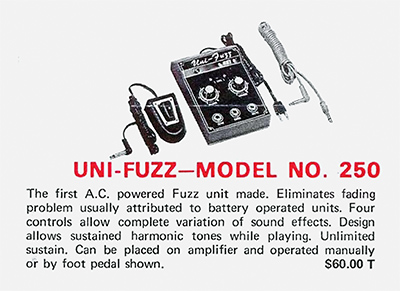 And for once, that salespeak just might have been right.

The tale doesn’t end here, though. Enquiring minds may wander back to that early Honey Psychedelic Machine and wonder about the second half of the dual-purpose effect – the chorus/vibrato circuitry. Engineer Fumio Mieda understood its brilliance, too. He packaged it in its own housing, and Univox sold it as the Uni-Vibe rotary-speaker simulator. But that’s another story.