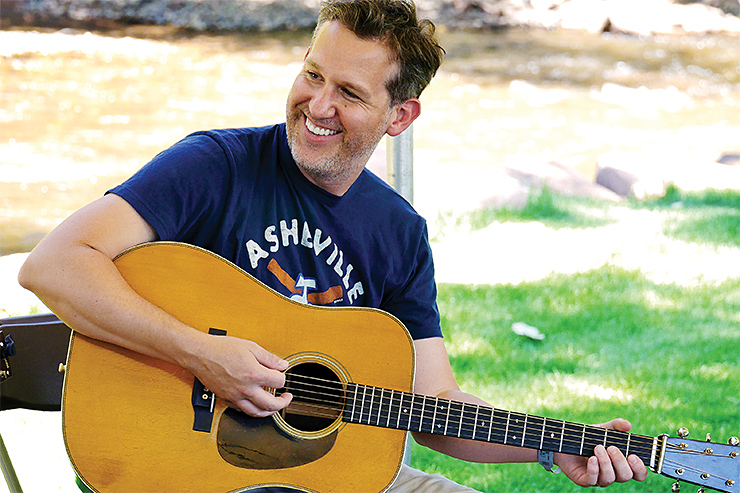 Bryan Sutton ranks as one of the most accomplished and in-demand acoustic players in Nashville. In 1991, fresh from high school, he joined the gospel group Karen Peck and New River. In ’93, he moved to Nashville and joined the band Mid-South for several months before studio work started to dominate his time and began full-time as a studio musician on gospel recordings.

Sutton’s recent solo release, Into My Own, has more blues and old-timey influences, and shows Sutton’s growth; besides stellar flatpicking and original songs, “Swannanoa Tunnel” highlights his nuanced, powerful lead vocals, and guest artists include guitar whiz Bill Frisell, Ronnie McCoury, and Noam Pikelny. The final cut, “Been All Around The World,” highlights the flatpicking style that draws from Norman Blake and Tony Rice, but expands it with precisely-articulated rhythm and subtle melodic flourishes.

For a number of years, Sutton’s go-to acoustic was his ’48 Martin D-28 with two black pickguards. Recently, though, he acquired another Martin – a ’42 D-28. “It has war-time specs with a T-bar truss rod, and has a punchy push of air that’s really good for bluegrass.”

The ’42 isn’t Sutton’s only “herringbone” Martin. He also has a 1940 Martin D-28. “The first time I played that guitar, I was hooked. I bugged Greg Luck for several years before he agreed to sell it to me.”

When it’s suggested that perhaps he could have merely borrowed the guitar for sessions, he pauses. “When I have a chance to play a guitar that great, I really prefer it to be an ownership relationship. I need to be able to make setup adjustments so it will play exactly as I want. There’s a certain ‘modern’ way to play bluegrass now that is very technically demanding, so a guitar’s playability has to be perfect to do the sorts of things that I need to do.” Comparing it to his other D-28s, he added, “The ’48 is a wonderful guitar for miking, and it’s very well-balanced. But, it doesn’t have the bloom of the ’40 and ’42 models.”

Sutton is also associated with Bourgeois guitars; Dana Bourgeois created the Country Boy and D-150 models Sutton used during his time with Skaggs. Bourgeois recently created the Bryan Sutton signature model, which will be based on the D-150 Sutton still uses on many of his studio sessions.

“It’s a very loud and responsive guitar,” he noted. “All of Dana’s guitars feel really good in my hands, and that has been consistent from the first instrument I played to this most recent model.” Only 30 BS D-150s will be produced, with an Adirondack-spruce top and bracing, Brazilian-rosewood back and sides, hide glue, double-scalloped X-bracing, and a vintage-type long-slotted saddle.

This fall and winter, Sutton will tour with Hot Rize, playing in Philadelphia, Washington, D.C., Chicago, and New York City.