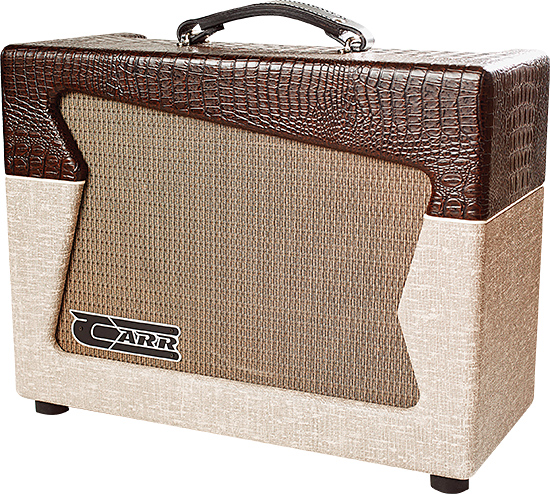 If you could own only a single guitar amp – horror of horrors! – Steve Carr’s new Skylark just might be the one.

When it comes to building modern boutique amps inspired by classic vintage designs, few people have the mojo like Carr. He founded his concern in 1998, and today is based in a former chicken hatchery in Pittsboro, North Carolina. Carr offers just 10 models, so when a new one comes along, it’s time to sit up and take notice.

Carr’s all-tube, point-to-point-wired Skylark may have been inspired by the old tweed Fender Harvard, among others. But along the way, he tinkered and tweaked his design into something unique.

The amp is an ideal home rig that can also stand up for itself playing gigs with that over-loud drummer and his monster crash cymble. It’s nicely compact, tipping the scales at just 36 pounds, so your roadie can have the night off.

The Skylark has tone in spades, but its most intriguing feature is its built-in attenuator.

Attentuators are typically wired into an amp between the output stage and the speaker, using a coil to reduce the output wattage. This allows the player to put more load on the amp at a lower volume, thus driving it harder. Dramatically harder. Few amp-makers offer a built-in attenuator, and most players are forced to add a stand-alone unit into their signal chain or effects loop.

So what does this electrical mumbo-jumbo mean to a mere guitar picker?

With the Skylark, players can adjust the amp’s output from a mere 1/100th of a watt up to a solid 12 watts. So if you’re playing at home or in a small club at a low-volume, low-watt setting, you can still make this amp sound like Bachman-Turner Overdrive at its finest.

Adding to the Skylark’s astonishing flexibility are its Mid and Presence controls, a High/Low gain toggle, built-in spring reverb, and a standby switch. All this in one amp.

The Mid control provides a wide range of sonic adjustment. The user can hollow out their tone at one extreme to just bass and treble with no middle, or conversely fatten that middle to potbellied proportions.

Presence works on the output circuit to buff up top-end muscle, as with an old Bassman. Dial it in to get a wide-open sound with glorious shimmer and sparkle. Or those picking a dark-toned vintage guitar can add bite. Lots of it.

The Skylark’s reverb uses a two-spring, 17″ reverb tank akin to those in ’60s Fenders. Carr adds an audio taper pot to control the reverb so it comes on more gradually, allowing the player to finesse levels.

And finally, there’s a new Celestion Type-A 12″ speaker that rings clear but still has nice compression. Thanks to the speaker’s smaller, lighter magnet, the overall amp doesn’t strain the back.

These features add up to one of the most versatile amps we’ve ever played. Distill that Mid and Presence to a pure treble tone that would make Don Rich grin ear to ear. Add a growl to the sound with the gain toggle on High and revel in Grady Martin-esque rockabilly tones. Or switch on that attenuator and make the amp grind out a power crunch like Eric Clapton playing the blues with Cream. And yes, once again, this is all in one amp.

Carr also prides himself on immaculate fit and finish. His team builds its own cabinets – one of the few boutique makers to do so. Carr employs solid pine, covers it with tolex, and tops it with a handmade leather handle, all done to ensure quality. And the ’50s styling speaks for itself.

Carr is a guitar player first and foremost, and his philosophy is that amps are instruments in and of themselves. The Skylark will make you sound good, and then make you want to play harder. And you can’t ask for much more than that.