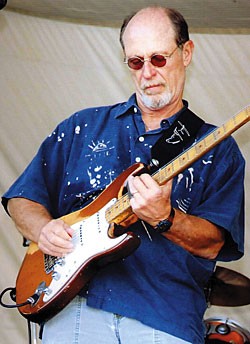 It’s been well over a decade since Vintage Guitar talked with Little Feat’s Paul Barrere, who went on-the-record when that band’s 1995 album, Ain’t Had Enough Fun, had just been released. In the interim, the Feats have continued to play music that culls from influences from all over the country, releasing numerous studio and live albums, a boxed set, and a live DVD.

“This is actually something Billy and I have been talking about for 10 years,” Barrere said of the album. “Even back then, we were thinking about doing a documentary on the band and having friends join us. We went as far as getting videotaped interviews with Bonnie Raitt and Eric Clapton, but we could never find funding to put the project together. Billy started working with Jimmy Buffett when Little Feat wasn’t working, and Jimmy invited us to go to his studio in Key West. We recorded 23 basic tracks, with the Little Feat songs being done different from the original versions.”

Barrere used both of his old Fender Stratocasters – a ’69 and a ’72 – for slide work on the album. He bought both instruments new and recently retired the ’69, noting that he’d bought the ’72 (a three-bolt model) when an airline lost the ’69 along with two of Lowell George’s guitars in the early ’70s (they were eventually returned). He also used an ’87 Fender Strat Plus for standard-tuned work, an old Gibson acoustic, and a vintage Telecaster and Stratocaster from McAnally’s studio collection.

The tracks were recorded with no decisions about which guests would perform which songs, Barrere recounted. “I thought the choices were brilliant. Dave Mathews wanted to sing on ‘Willin’,” but we sent him a tape of the new version of ‘Fat Man in the Bathtub,’ and it worked out great. Each song seemed to put itself together and take on a life of its own!”

The musical guests were invited because of their vocal and/or instrumental prowess, and all were enthusiastic, Barrere said. Some of the results seem tailor-made for certain performers’ styles, as exemplified by Bob Seger’s vocals on “Something in the Water,” a Jeffrey Steele song.

“Mac brought that song,” said Barrere. “That was one where they had Bob in mind from the get-go.”

Little Feat has long been compared to the Band regarding its primeval propensity to mix numerous influences, so the choice of “The Weight” on Join the Band (with Bela Fleck sitting in on banjo) was intriguing, particularly since the Feats hadn’t recorded it before. Barrere and Little Feat’s other guitarist, Fred Tackett, do live acoustic duo shows, and had been covering “The Weight” at such intimate performances, so it fit the concept of Join the Band. 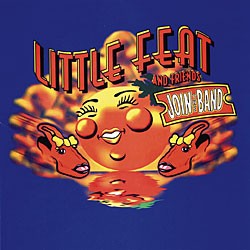 A tremolo effect can be heard on more than one tune on the album, and it’s particularly noticeable on “Champion of the World” (Jimmy Buffett and Barrere share lead vocals). Barrere credits Tackett for that particular sonic innovation, pronouncing Little Feat’s other guitarist to be “…a master of that effect. He knows where to put it, and how much to put in.”

Mike Gordon plays bass on an intriguing cover of Woody Guthrie’s “This Land is Your Land.”

“That’s a song we had actually recorded about 12 years ago, when Windham Hill was trying to put together a benefit project for the Nature Conservancy, and were asking artists to do ‘American songs’,” Barrere recalled. “We came up with the idea of doing a sort of funky version. I thought it was great, but unfortunately, it never saw the light of day, so when this project came around, we wanted get it on there because it’s a very timely song now.”

Former Little Feat lead vocalist Craig Lee Fuller returns to share singing duties with Sam Clayton on “Spanish Moon,” and that track is all the more interesting since Vince Gill takes an acoustic guitar solo. Both Fuller and Gill are also former lead singers for Pure Prairie League, and Gill does get in a vocal performance on Join the Band, splitting lead vocals with Barrere on “Dixie Chicken.”

“Trouble,” by Lowell George, features a plaintive vocal by his daughter, Inara, accompanied only by Billy Payne on piano. Barrere noted that Inara has “…a wonderful voice and a great stage presence. She was born when we were in Maryland, recording Feats Don’t Fail Me Now. ‘Trouble’ was like a lullaby when she was a baby. It was a nice way to tie in the whole Lowell aspect.”

Barrere and the band are pleased with Join the Band, and he said the project was a lot of fun for Little Feat and their guests. The band will be doing another studio album, he added, “but we probably won’t get to it ’til next summer because we built a wave with this album and want to try to ride it for a while. I’ve got my fingers crossed that it will resonate with fans.”


This article originally appeared in VG‘s January 2009 issue. All copyrights are by the author and Vintage Guitar magazine. Unauthorized replication or use is strictly prohibited.
Gryphon Labs feat. Paul Barrere “Driven to Drink”
The New Gear Yearbook