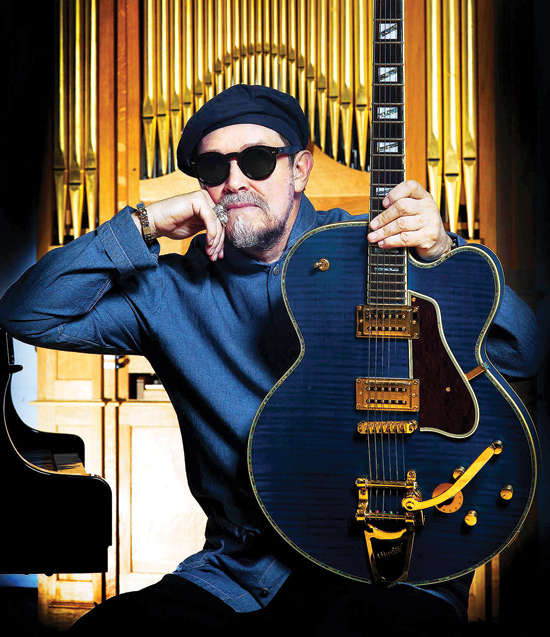 Most people remember Bill Nelson as the front man/guitar hero in the English band Be Bop Deluxe. Since folding that outfit 35 years ago, he has led a fertile solo career, releasing dozens of solo albums ranging from guitar rock to pop electronica. His latest, Blip!, showcases his hot playing with lush pop.

Who were some of your key guitar influences?
My first was Duane Eddy. I heard “Because They’re Young” on the radio in the late ’50s and loved the sound of his guitar. I then got into the Shadows and the Ventures. In my early teens, I bought records by all kinds of instrumental groups, some obscure like the Spotnicks, the String-A-Longs, the Cougars, the Fireballs, and Johnny & the Hurricanes. I also discovered Chet Atkins and Les Paul. My English Lit teacher loaned me a Django Reinhardt album, which led me to Wes Montgomery, Jim Hall, and Joe Pass. Later, I was inspired by Clapton, Beck, and Hendrix.

Still, your solos use chord-tension notes normally found in jazz.
The jazzy element comes from being exposed to jazz and swing music as a kid. My father was a saxophonist and in the ’60s, I picked up on the contemporary jazz scene – not just guitar players, but Miles Davis, John Coltrane, Charlie Parker, Gil Evans, Thelonious Monk, Sun Ra, and Ornette Coleman. I have no academic knowledge of music theory; I play by ear – I’m what my father used to disparagingly refer to as a “busker.”

What guitars did you use on Blip!?
The main guitars were a Gretsch White Falcon, a Fender Custom Shop ’59 Strat, my Campbell Nelsonic signature model, an Eastwood Wandre Tri-Lam, a Peerless Deep Blue Custom, and a Gibson Custom Shop Les Paul Black Beauty. I recently got a Hallmark Stradette and an Eastwood California Rebel I’ve been recording with. I do have a lust for unusual guitars. They can put an entirely different spin on things.

Do you record guitars direct?
Yes, without any mic’ing of amps or cabs. I mostly use a Line 6 Pod 2; for some reason, I prefer the sound of the early ones. I also have an old Zoom 2050 rack processor and a Digitech Valve FX rack processor I add to my rig for live performances. I also have a Line 6 Pod HD500 I use in the studio when I need a more-abrasive rock sound. In conjunction with the Pod 2, I’ve also recently been using a Line 6 M5 stompbox modeler that Reeves Gabrels gave me. Some of the filters and sequenced tremolo effects in the M5 are interesting. Reeves and I are recording an album together, too.

Do you still own the Gibson ES-345 and Yamaha SG2000 guitars from the Be Bop Deluxe era?
My ES-345 is still with me and I’d never sell it. My dad bought it for me in the early ’60s and it’s a wonderful guitar, but I rarely take it out of the house. The musical memories it contains are very special. I’ve kept the second of the two Yamaha SGs – the cherry sunburst one I played toward the end of Be Bop Deluxe was sold in the early ’90s, but I still have the dark green one I played in the ’80s. It’s a little road-worn and needs new knobs and a switch tip, but it still has a great action.

Blip! tracks like “Whirlwind Winters” and “Painting Your Sky” have some great guitar work.
I still get a thrill from kicking in the retro-rockets and going for the widescreen guitar solo. But I also love the more subtle, reflective, jazzier approach. The electric guitar is capable of so many beautiful moods and textures – I’m rather greedy and enjoy it all. I’ve always had broad tastes in music and tried to incorporate the sound and style of early electric guitar alongside a more-contemporary approach to the instrument. It’s an evolving process.

What are your recollections of Be Bop Deluxe? That music still sounds fresh.
Personally, I can be a little ambivalent about Be Bop Deluxe. Those few years in the ’70s represent a fraction of my career, but because of the era and the more-commercial nature of the music I recorded back then, the band has become the main signifier of my work. I’ve never stopped making music and never felt I’ve reached my goal, whatever that might be. I’m still looking to make an album which will satisfy me. For me, Be Bop Deluxe was just a starting point in an ongoing adventure. I have fond memories from that time but I don’t feel particularly defined by it. Nevertheless, I’m more inclined to look at the world through a vehicle’s front windshield rather than its rearview mirror. The future, I hope, will always be more magnetic than the past.