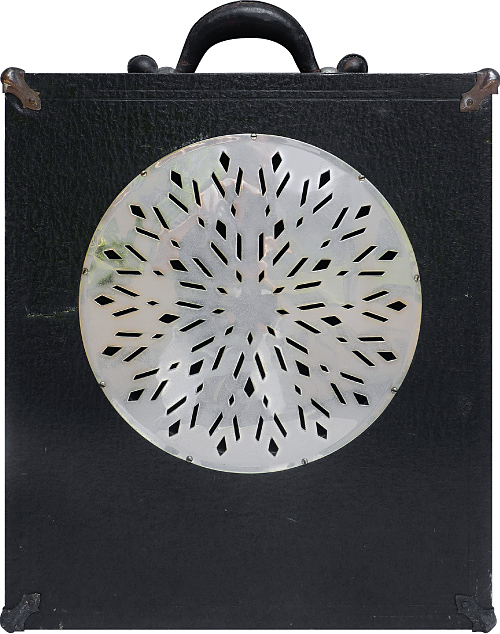 Why doesn’t this ever happen to us? You ride along with your brother to an antique radio show just to give him some company – it’s his thing… not yours – and while poking around the musty stacks of archaic tube-powered technology, you stumble upon a guitar amp from the earliest days of the electrification of the instrument.

Being a guitarist, you don’t think twice about the $50 asking price. A trip to a radio repairman and a few bucks more gets it working, and correspondence with a couple of experts on the brand confirms your find is as a rare and valuable a 1933 National-Dobro Model 6107A amplifier.

So goes the story of VG reader Billy Claire, owner of this fine piece from the dawn of amplification, truly the ultimate needle-in-a-haystack picker’s find.

“Some guy found this in a barn,” Claire said. “I had to clean straw out of it. There was no schematic, but [the repairman] was able to figure it out since these early amps were simply a radio without the tuner – just the power section.”

A look inside the chassis confirms that these used a very basic circuit. You want true point-to-point? This is the very definition of the term. Given that the electric guitar was in its infancy when this was made, it’s only logical that amp makers hadn’t gotten much further than cobbling something that would make a little noise, and not much beyond that. Crystal radio sets had existed since just before the turn of the century, but vacuum-tube amplifiers had only come into existence in the mid 1920s. Rickenbacker had prototyped its “frying pan” electric guitar in 1931, with a pickup developed by George Beauchamp while he was still with National. Having founded National with his brothers and other parties in 1926, John Dopyera split from the company in 1929 after a dispute, then began the process of reuniting after the rift was healed in 1933. Most records indicate that National didn’t release an electric guitar and amp set until 1935, just after officially becoming the National-Dobro company. Dobro, however, had by this time had an amp on the market for two years as part of an electric set that included a Hawaiian (a.k.a. lap-steel) guitar. That two-year period from 1933–’35 appears to have been pretty incestuous, though, with plenty of sharing of designs and products. However you look at it, when you consider the roots of amplification, this thing undoubtedly falls somewhere at the deep, probing tip.

By the mid ’30s, other companies were getting into the game – Gibson, for example, would release its EH-150 Electric Hawaiian guitar and amp set in 1935 – but National had been a pioneer in the volume wars even before electrification was seen as the way forward, back when, if you wanted more volume, acoustic volume seemed the way to go. After debuting its loud, punchy tricone resonator guitars in 1926, National followed a few years later with a single-cone model (to rival Dobro’s single-cone wooden guitars of ’29). You have to envision the “Doh!” moment when the guitar universe quickly decided the pickup-into-amp was the way to go, but never mind. National and Dobro resonators won their own fans, and the company was primed to hit the electric market, too. One cool remnant of its origins, though, is a speaker grille reminiscent of the “hubcap” cone covers on National-Dobro’s resonator guitars – a clever piece of branding… even if it might mute the tone slightly compared to an aurally transparent grillecloth.

In researching the history of this amp, Claire corresponded with two authorities on the National and Dobro brands – Michael Messer and Mark Makin, both based in the U.K. Messer – also a blues guitarist of note – pegged it as a 1933 model, while Makin figured it for a ’35, having seen a different grille on earlier models. With no viable records to go on and, as in this case, no reliable markings or standardized date codes within the amp, these fledgling creations can often be difficult to date accurately, but we have a hunch this one might lean toward the earlier date. Other examples have crinkle-coated chassis and a National-Dobro name plate on the back. Perhaps, then, this was even a prototype or a very early pre-production example from Dobro, before officially joining forces with National. Before long, National-Dobro would morph into the Valco and Supro brands, while continuing to use the National brand on many electric instruments, while moving east to Chicago circa 1936.

Makin’s reply also confirmed that the chassis was made by Webster Electric Company of Racine, California, while the cabinet was constructed by Bulwins of Los Angeles. The Model 112 10″ field-coil speaker came from J.B. Lansing, which was just down the road from National (later models also carried Utah and Rola speakers). Though later National-Dobro 6107As tended to ride in shorter, squarer cabs, the basic configuration and circuit of the amp itself remained much the same, with just a single knob that doubled as a Volume control and power switch with a “click” at the counterclockwise end of its journey, though this knob would be on the rear face of the chassis as of 1935, rather than on the top. Output tubes were a pair of 2A3 triodes, with a 56 and 57 for preamp and phase inverter, and a 5Z3 rectifier. The 2A3s are, surprisingly, still available, with a replacement even being made by Electro-Harmonix. Rated at a maximum output of three watts each, these are likely to give the amp just five or six watts total. And, as triodes, they have an inherently dark, warm sound, which you also hear from this 6107A. Being within maybe two years of the birth of electric guitar as a commercial venture, we can imagine the makers (and many players) were pretty darned impressed that you could plug a guitar into this thing and achieve any sort of louder sound at all, never mind any great depth or refinement of tone. You just know, though, that it actually sounds pretty cool; restrained, sure, and in no way shimmering with harmonic bounty, but it has a beefy, thick tone that simply screams “seminal tube amp,” and which is really quite appealing. Whatever it sounds like, you can’t help but imagine the look on the face of the guitarist who plugged into it back in 1933 and fired up what was very likely the first electric guitar they had ever played. Is there even a slim chance they could have envisioned where this revolutionary technology would lead? Either way, we’d like to think they were smiling.