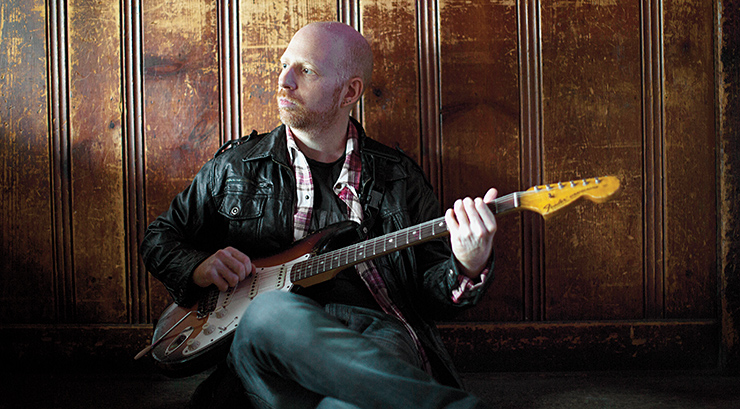 Oz Noy is talented enough to pay the bills not only as a first-call New York session cat, but also as a prolific creative force in contemporary fusion. His current release is Twisted Blues Volume 2, and it’s the perfect bookend to the critically acclaimed first volume. In it, he turns the much-loved genre of blues inside out.

Twisted Blues Volume 2 is so good.
This one was really hard to do. The recording didn’t take long but it took a while with everybody’s schedule. Then I had a problem with my amps and mixing it. It just took a long time to get it right. It turned out good, but it really was the hardest one I’ve ever done.

I get the feeling from this record that in a different life you might have been born in New Orleans.
(Laughs) I’ve never been to New Orleans. Allen Toussaint plays on the record, and, of course, he is the king of New Orleans so I guess something rubbed off on me.

On Volume 2, there are actually four tunes that are pretty much inspired by drummer Chris Layton’s groove. I knew the groove that I wanted to write these songs to; we were doing dates in New York and he was playing the “Slow Grease” and “Blue Ball Blues” groove. When I heard that, I was like, “Man, I’m going to write something over these grooves.” I wrote those songs, and then I wrote this song called “Let Your Love Come Down,” which is kind of a similar idea. It’s based on a Stevie Wonder riff.

The groove is actually a Chris Layton groove from a Stevie Ray Vaughan record. That’s how I operate – I find a concept. A lot of times, I will start with a groove and sometimes I’ll start with harmony or melody. The groove is always what inspires me, and then I start writing over it. The whole harmonic thing comes on top of that. I already have the vibe of what I’m going for, and then I’m searching for harmony and melody.

Had you performed these compositions live before you recorded them?
Every record I do, I play the music at least a year to two years before. Some of those tunes we played up to a year or more before. I don’t go into the studio and just play. It never works out for me.

Did you record with Eric Johnson at the same time?
Yeah. “EJ’s Blues” was recorded at Eric’s studio. We all played in the same room together – no overdubs, no nothing. The base of the whole record has no overdubs. The only overdubs that happened were for Chick Corea, Warren Haynes, and Allen Toussaint because I couldn’t get them in the same studio. The reason the record took so long is because of scheduling the guys I wanted. My playing and the rhythm section playing are all live. I never overdubbed anything. I wanted to keep it like a jazz record.

What did you think of Warren Haynes’ performance?
I was there. He killed it (laughs). He really did! What are you going to do?

You shift effects from chords to single notes all within the same bar. It’s so seamless.
A big part of the time, my foot is on the switch to the Leslie pedal. It’s like playing an organ where you turn the Leslie on and off. It’s almost like I’m comping behind myself. When I comp and play the chords, I put the Leslie on. When I play melodies, I take it off. I’ve been doing this for a while. It’s what I do when I play live. I’m not overdubbing and punching-in stuff.

What’s next?
I have no idea (laughs). I don’t have a plan. It’s a weird time for me now because I completed my mission.