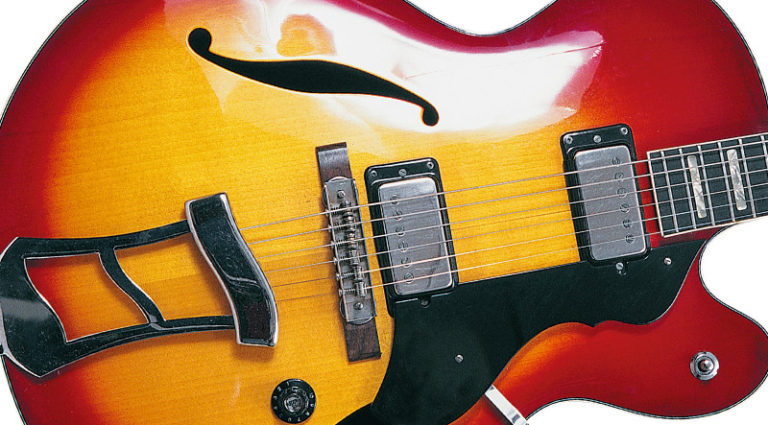 In the world of archtop guitarmaking, the legendary luthier James L. D’Aquisto (1935-’95) is considered one of the greats. A jazz guitarist, D’Aquisto was an apprentice to perhaps the greatest archtop maker of all time, New York’s John D’Angelico, from 1952 until the luthier’s death in 1964. Toward the end, D’Aquisto was essentially making all D’Angelico guitars and eventually D’Aquisto struck out on his own.

Today, his creations are desirable (and expensive). However, like many another famous luthier, there were some periods in his career when D’Aquisto worked with a large company to design guitars intended to be factory-produced. For D’Aquisto, those companies were Hagstrom and Fender.

D’Aquisto’s first venture into such an arrangement began circa 1968, when the Hagstrom company of Sweden recruited him to design a line of archtop jazz guitars for them. Ironically, most of us associate Hagstrom with those little double-cutaway guitars covered in vinyl with plastic “swimming pool” pickup assemblies. Great necks, but a little goofy. However, below the surface you’ll find some sophisticated and interesting guitars, many of surprisingly good quality. By the early ’60s, the company was making the Corvette and Impala, with some of the first heelless neck joints (and the pastel “vegematic” controls were a definite plus!). Hagstrom struck again in the early ’70s with the ribbon mahogany, single-cutaway Swede that picked up an endorsement by Larry Coryell. But perhaps the piéce de resistance of the Hagstrom run was their electric/acoustic archtop, the Jimmy, designed by D’Aquisto.

The Jimmy debuted in ’69 as a downsized archtop with 16″ body that was narrower and thinner than a full-sized jazzbox. It had an arched (not carved) laminated spruce top, unbound f-holes, birch body and neck, and bound rosewood fingerboard. It also featured the asymmetrical D’Aquisto-style head with a large pearl inlay, twin pickups, a small, thin D’Aquisto-style two-point Florentine pickguard, and a large cast “harp” trapeze. Most models had pearl dot inlays; it’s not clear if some had blocks. They were made in blond and sunburst.

Although 480 Jimmys were produced in the initial run, they were more in the nature of prototypes because Hagstrom intended to farm out production to the Swedish Bjarton factory. But before it could happen, Bjarton closed its doors.

In any case, the late 1960s was not a great era for guitar sales. Valco/Kay went out of business in ’68, followed by Danelectro in ’69. So Hagstrom stopped the project. But it didn’t abandon the dream; D’Aquisto’s headstock was used on the Swede and Hagstrom’s Viking thinlines in the early ’70s.

In ’76, Hagstrom called for D’Aquisto’s help again, to make a few refinements, and get the line into production. Hagstrom reintroduced the original Jimmy, with a slightly more conventional pickguard and pearl block inlays. Bodies were laminated birch, with a two-piece birch neck flanking a mahogany strip. Tuners were Grover Imperials with the groovy stairstep button. The Jimmy was available in Cherry, Sunburst, Golden Sunburst, White, and Natural.

These Hagstrom Jimmys are fine-playing guitars, delivering a range of tones from crisp trebles to a throaty, jazzy bass on the neck pickup. The pickups are not as hot as those on contemporary American guitars, but these were not intended for producing tons of volume and distortion. The workmanship is excellent. As you’d expect on a Hagstrom, the neck has a very thin profile. The 16″ body is very comfortable. You can’t compare it to an acoustic jazz box, but it was, after all, designed both for production and amplification, and the guitar delivers for either electric jazz or fusion. Between 1976 and ’79, a little more than 1,200 f-hole Jimmys were built.

The f-hole Jimmy was joined by another D’Aquisto-designed model in ’77. Basically this Hagstrom Jimmy was identical except that instead of f-holes it sported an oval soundhole. These are actually much rarer birds than the guitar shown, since only a little more than 350 were produced by the time the model ended in 1979.

In ’78, the venerable double-cutaway Viking thinline was also identified as being part of the D’Aquisto legacy. It had already incorporated the D’Aquisto headstock, so why not? Whether or not D’Aquisto was actually hands-on involved with these is unknown. These Jimmy Vikings also lasted only through ’79.

Jimmy D’Aquisto’s second cooperative venture with a big company was to design part of the Fender 1984 Master Series. The Masters included the chambered solidbody Esprit and Flame, designed by Dan Smith, and the D’Aquisto archtop. These were conceived as set-necks that would compete with Gibson. They were originally to be made in Fullerton, but a reality check shifted production to Fuji Gen Gakki, the Japanese factory known for producing Ibanez (and Fender Japan).

Made of flamed maple instead of birch, the Fender D’Aquistos had a lot in common with the earlier Hagstroms, including an almost identical body and the Florentine pick-guard. The head featured an extended open book design instead of D’Aquisto’s French curve, announcing the challenge to Gibson. Instead of the large cast tailpiece, Fender D’Aquistos had a carved ebony violin-style tail. Two models were produced, the Elite (with an ebony fretboard, block inlays, and one Schaller D’Aquisto humbucker in the neck position) and the Standard, with a rosewood ‘board and two humbuckers. Both were identified as D’Aquistos with an engraved headstock inlay.

Neither the Hagstrom Jimmy nor the Fender D’Aquisto are really D’Aquisto guitars, because he merely designed them. But from another perspective, they really are D’Aquistos because he designed them. Both brands are esteemed by players and have devoted fans. They will be dramatically less expensive than a D’Aquisto-made D’Angelico or a handmade D’Aquisto. Still, they’re a significant part of a minor chapter in guitar history… and a little piece of the Jimmy D’Aquisto heritage.

This article originally appeared in VG‘s June 2005 issue. All copyrights are by the author and Vintage Guitar magazine. Unauthorized replication or use is strictly prohibited.