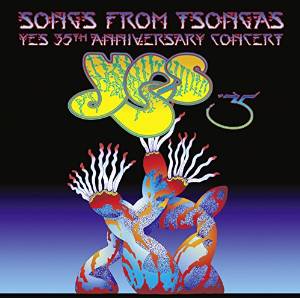 Compared to today’s meek-sounding band, this lineup still had the fire and played many of their best tracks nearly as well as they ever could. Another critical difference were the vocals of Anderson, whose breathy, soaring tenor hadn’t yet been diminished by the severe asthma attack in ’08 that nearly ended his career.

Yesheads will particularly dig rarities like the Rickenbacker-bass-fueled “Ritual,” “South Side Of The Sky,” “Going For The One” (featuring Howe’s hot steel guitar), and even the three-part “Mind Drive,” a late-era prog suite from the ’90s.
Negatives include a pair of Trevor Rabin-era tracks that have nothing to do with Howe or Wakeman, and “Roundabout,” which is turned into a trashy cocktail-lounge number.

The joyous spirit of the remaining cuts and each members’ superb performances more than make up for these, though. If you consider that 1973’s Yessongs was Yes’ first great triple live album, then Songs From Tsongas is probably their last. Grab it.