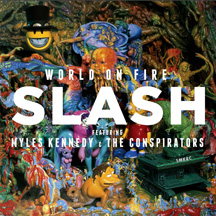 Slash and his rock and roll posse have released their third solo album with Alter Bridge vocalist Myles Kennedy. This is a mean, heart-resuscitating rock machine with driving tempos, crunchy chord work, and the most incredible guitar playing of Slash’s career.

Comparisons are unfair, but any album that Slash releases will be compared to the groundbreaking Appetite For Destruction recorded 30 years ago. While Slash’s guitar playing displays more melodic range, precision, and fire than ever, the compositions on World On Fire are unmemorable.