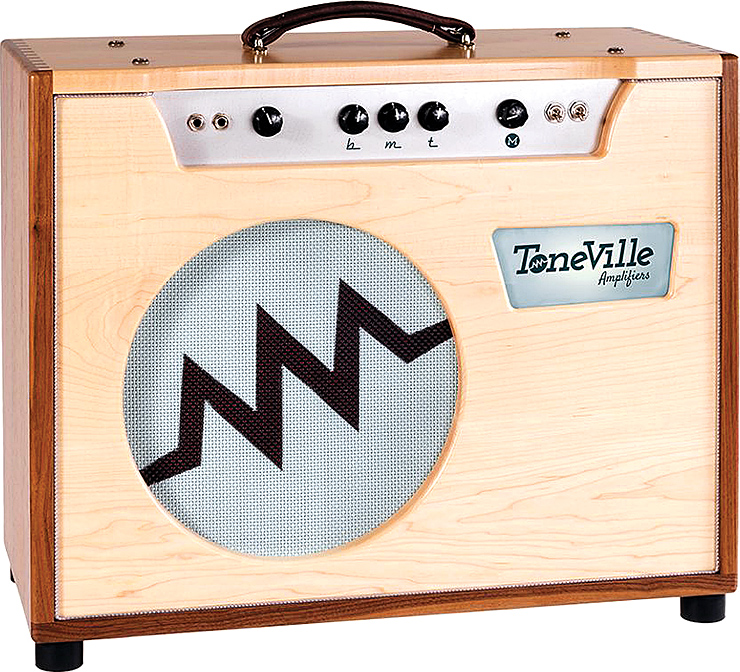 What is it that drives boutique amp builders to expend gallons of skull sweat striving for a more-perfect union between the pluck of steel strings over wire-wound magnets and obsolete 1950s audio technology? If you have to ask (or if you can’t appreciate the differences between an overdriven power tube and a clipped transistorized signal), then you are clearly not in the market for a hand-wired work of beauty like ToneVille Amplifiers’ Broadway.

Like many point-to-point tube amps, the Broadway’s visual style recalls a ’50s motif – aerodynamic, round-shouldered, with a touch of console TV thrown in for good measure. When the standby switch is flipped on, a warm white light shines behind a translucent logo on the front panel. You almost expect it to start out as a dot of light and slowly expand into a full episode of “I Love Lucy.” The control knobs are all in front, alongside inputs for low and high gain.

One of the most distinct visual features with ToneVille amps is their cabinet construction – beautifully finished, light-colored maple for the top and front panel complemented by dark walnut sides, all sourced near ToneVille headquarters in Colorado Springs. No need for Tolex or tweed here. Perfectly fitted and visually striking dovetail joints accentuate the contrasting wood tones and undoubtedly contribute to the amp’s sonic characteristics.

Speaking of tone, this baby breathes! The lows have tremendous punch and the highs are very Vox-like. ToneVille uses a 12″ Celestion speaker voiced to their specs and that, at low- and mid-gain levels, helped the Broadway deliver chimey, clean tones that paired well with flat-wound strings on a Gretsch 6122. It also delivered surprising volume with plenty of headroom – nothing like one might expect from a 15-watt amp. It will easily hold its own in the mix with bigger brethren. The amp’s ability to move a lot of air is likely a combination of the AC15 circuitry and the obviously beefy, hand-wound transformers that ToneVille has custom-made in the United States to their specifications. There’s a lot of iron in these amps – you’ll know it when you pick it up to haul to your next gig! That’s the trade-off when an amp is built like a ’58 Cadillac El Dorado.

At higher gains, the Broadway crunched beautifully enough to impress a young shredder who ditched his OD pedal for the chug of the dimed Broadway. Fortunately, the amp has a Master Volume push/pull pot that engages an attenuator so you won’t have to achieve that overdriven tone at the expense of your marriage or your neighbor’s goodwill. ToneVille also incorporates a feature that allows the tone stack to be “lifted” about 80 percent out of the circuitry by moving the midrange pot between 50 and 100 percent (the midrange pot is at full when the knob is at 50 percent). According to ToneVille founder Matthew Lucci, many of the Broadway’s components have never before been used in an amplifier, but that’s hard to verify because the inside of the chassis is accessible only with a special tool. However, judging from the use of Mullard NOS tubes (three 12AX7s in the tone stack, a matched pair of EL84 power tubes, and a GZ34 rectifier), the capacitors and other components are likely first-rate.

The Broadway is gorgeous, sonically and visually. It won’t meet everyone’s needs – there’s no built-in reverb, tremolo, or effects loop. But it’s all about simple circuitry that yields purity and clarity.