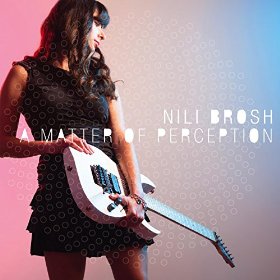 Nili Brosh takes the phrase “playing like a girl” and turns it on its ear. This new album weaves the kind of muscular soloing, graceful melodies, and strenuous time signatures that would send most men running to the woodshed. The genre is instrumental prog-metal, and performing in Tony MacAlpine’s band for two years has made Brosh dangerous.

Fat single-note lines support wide interval licks that seamlessly blend fluid legato, speedy alternate picking, and compositional two-handed tapping. The title track along with “The Spring Tune” is a transcendental voyage that swoops and careens though rhythmic peaks and valleys. She gets support from the prodigious talents of Stu Hamm, Bryan Beller, Anthony Crawford, Marco Minnemann, and Virgil Donati to name a few.

The album conjures sci-fi and fantasy dreamscapes, but within it’s theatricality, Brosh infuses a sense of beauty and lyricism. Her cover of Virgil Donati’s “Alien Hip Hop” is sheer perfection. Brosh’s CD is the best instrumental prog-metal record of the year.

Bernie Williams – The Journey Within