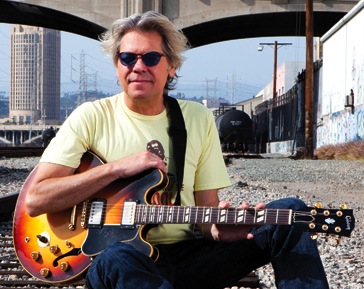 Jeff Golub, a multi-genre guitarist whose career included stints with Rod Stewart, Billy Squier, Sonny Landreth, Robben Ford, Marc Cohn, Tina Turner, and many others, died January 1. He was 59. In late 2013, he was diagnosed with Progressive Supranuclear Palsy (PSP), a degenerative brain disease that at first caused him to lose his eyesight and later impacted his ability to speak and control his movements. There is no treatment or cure.

Golub was born in Ohio, took up guitar as a child, and played his first gig at age 12, inspired by Eric Clapton, Jeff Beck, and Jimi Hendrix. As a teen, he heard Wes Montgomery music and later studied at the Berklee College of Music. In 1988, he released the first of more than a dozen albums as a soloist and leader of Avenue Blue Band.

In June, 2011, Golub became blind due to the collapse of his optic nerves. In September, 2012, he fell on the tracks of a subway in New York City, and suffered minor injuries. His final album, made with keyboardist Brian Auger, was Train Kept A Rolling; its title was inspired by the incident. He was most recently interviewed by Vintage Guitar for the January ’14 issue Here.

Golub is survived by his wife and two sons. A tribute concert is scheduled for January 21 at B.B. King’s Blues Club, in Manhattan.