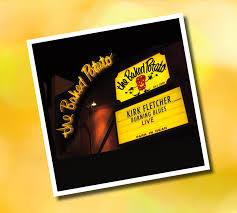 Blues gets a bad rap because of a preponderance of mediocre imposters who lack the magic. The great stuff will stir you and mesmerize. Two-time WC Handy Award nominee Kirk Fletcher has the magic, and this album is Exhibit A.

Recorded on separate nights at the legendary Baked Potato in Studio City, California, Fletcher is joined by drummer Lemar Carter and bassist Travis Carlton on the first night. The second night consists of Carter, bassist Calvin Turner, and Jeff Babko on organ.

Fletcher’s playing is a synthesis of the best qualities of contemporary electric blues, but he isn’t confined by it. On “Blues For Robben & Larry,” Fletcher displays a limitless flow of concepts in a slow-blues context.

His exceptional band swings hard on “Ain’t No Way” with Fletcher nodding to B.B. King and Robben Ford with juicy virtuosity and zeal.